Wendell Burnette Architects has released images of their design for Saudi Arabia’s 1st UNESCO World Heritage Site, the MADA’IN SALEH or HEGRA south of Petra; which has recently been approved by The Saudi Commission for Tourism & National Heritage. 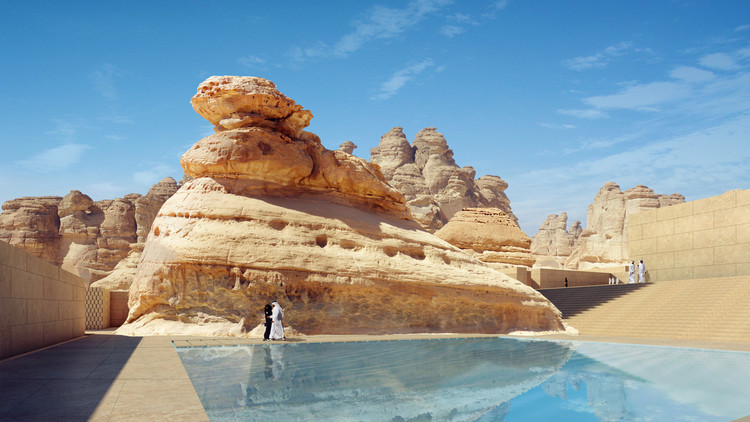 Our hotel concept for the MADA’IN SALEH UNESCO World Heritage Site is designed as a mirage within the south edge of the Jabal Ithlib (Mountain of Standing Stones). From afar, our design intends to recede, to disappear into an isolated group of smaller standing stones as an anonymous base constructed of light silica stone from the sand plain in a simple geometry - quiet and humble and unknown to the roads approaching the Jabal Ithlib and the ancient city of Hegra.

From any direction on foot, on camelback, on horseback or by carriage - no glass, no reflections, only a low stepped sandstone base - even at night, one may only discern the warm glow of a group of campfires around some island rocks.

Within this low base plinth we find a solitary stationary stone camp around a magical Rock Garden, filled with voices, the sounds of Lute, the Rabada and the smells of burning Al Samar Wood, Oud Incense, and outdoor cooking. In the spring night, the entire camp is perfumed with the smell of a thousand Al Ula Citrus blossums.

In the morning, the camp wakes up to the sound of Nabataean well water filling the stone channels, which feed the grapefruit, oranges, tangerines, lemons, limes and as starlight gives way to the sun - stone-paved streets softly echo with the sounds of sandal covered feet, the rustle of fabric dress and hushed conversation making their way to early morning prayer or a light breakfast.

At the heart of the stone camp we find the smaller standing stones – a Rock Garden, which provide a focus for the public life of the camp, a stepped town square from where one can see out in all directions; through and between the solitary stones to the Jabal Ithlib north and most prominently the mysterious Standing Stones that form the ever-changing west ridge.

From the public rooms surrounding the town square expansive views fan out over the stone tabula rasa base toward the Wadi of Al-Hijr southeast and the distant jagged peaks that form the canyon valleys at Al Ula southwest; all the while revealing nothing of the scale of the camp below and behind the Rock Garden or the private languid life within. One arrives in this remote desert camp from a large wooden gate between two large stones where we are welcomed into a formal Acacia Grove forming a large shaded arrival court.

Emanating from the heart of the town square are ramps, stepped plazas, a long corniche or promenade and self-shaded streets or Siq’s; which all lead ones eyes and feet out onto the vast sand plain, the Jabal Ithlib and the Mada’in Saleh … maybe on camel and / or horseback. Along the way, one also discovers an unexpected desert oasis threaded throughout the walls of the village camp - Citrus Courts of every variety, deep water wells, water channels, shallow reflecting pools w/ fountains.

With a bronze key one unlocks a smaller wooden gate to your own private camp / courtyard or estraha replete with the sound and smell of precious life-giving water, abundant shade, and in the Spring season - bees, wildflowers - and always day and night a framed solitary view of infamous Arabian Deserta. 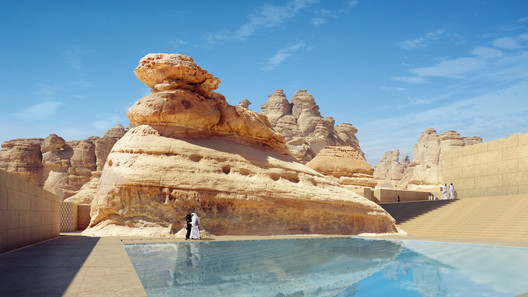