The magazine’s introduction of the Alpha house avows: “Together these people had decided on a most favourable scheme, to settle themselves side by side”—which of course provides the architect with an excuse for designing two houses as an intimate pair, but might cause a raised eyebrow if we consider the psychological state of grown women insisting on raising their families in this twinned condition. Neutra, known to employ psychoanalytic tricks on his clients to win their commitment to his ideas, and by his own admission “quite enthusiastic in placing the accent on individuality on the consumer,” surely delighted in this fantasy.

As with the Omega house, and appropriately for the southern California setting, the (hypothetical) brief emphasizes outdoor living, and in particular the need for the space to accommodate a large group of children—the groups from each family co-mingling and travelling around from patio to patio. Wide open sliding doors meet that need for easy traffic, this transparency contrasting with the suggestively hidden, libidinous play area provided by the lath house “overgrown with vines.”

More innuendo comes to light with the requirement that guest accommodation should be far away from the family bedrooms and their “negligé-behavior.” They are “not prudish,” these Alphas, and indeed most families might be uncomfortable with their practical notion of having "a lavatory right in the room" of the eldest son in order, apparently, to facilitate sleepovers.

Like the Omega house, Alpha has a sloping roof, but in this case it tilts down toward the kitchen and garage—avoiding the Omega time-trap of having children stuck in low-ceilinged rooms they are sure to grow out of. Just as well, since the Alpha kids are already heading into adolescence; this does point to the impending obsolescence of the play area, but then, it is just a wide corridor after all.

The shared features of the two houses—tilted roofs, identical fixtures, finishes and facing materials—make a statement about neighbourhood planning. These houses are not intended to stand alone, but to be part of a community (albeit perhaps less intimate than the almost incestuous Alphas and Omegas). They look outward; not just literally, thanks to the abundant glass that takes advantage of those Californian views, but figuratively, acknowledging that an individual home takes its place within a neighborhood and contributes to it. This community spirit and the indoor-outdoor lifestyle planning evinced by Neutra’s designs—both firm tenets of modern housing development—withstand examination perhaps better than the details of the bedroom arrangements.

Don't miss Archilogic's other models of Case Study Houses and seminal projects shared on ArchDaily—click here to see them all!

Correction Update: This article originally stated that "neither" of Neutra's Case Study Houses was built, implying that he designed only the two houses mentioned in this article. In fact, Neutra designed a total of four houses for the program, and one of these was indeed built: #20, the Stuart Bailey House (not to be confused with Pierre Koenig's Walter Bailey House, #21). The article has been amended to reflect this fact. 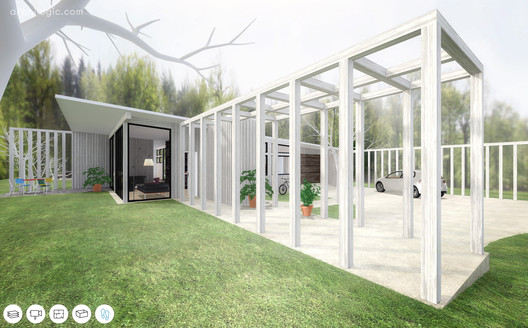