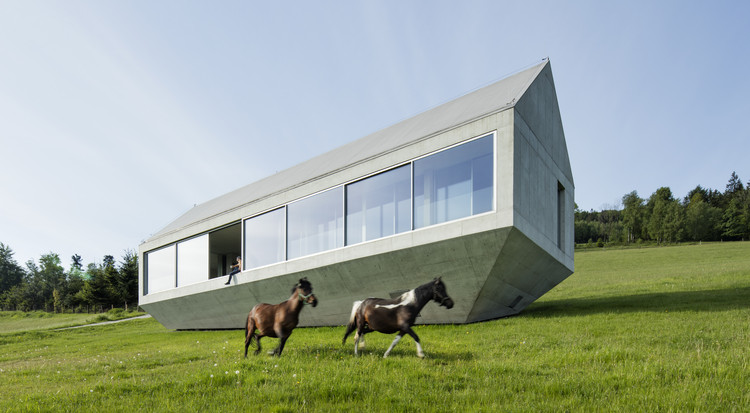 Text description provided by the architects. The highest value of the plot is a wonderful view stretching out. The idea was for the house to become its framework that crops it. The most appropriate building turned out to be a fully open on mountain landscape one-storey building, which gives the same view to all of the interiors.

Because of the plot being located in an absolute wilderness a problem of security came out. The solution turned out to be "twisting" the building so as only its one corner touches the ground and the rest is hang over the edge of the hill. With this solution, part of the ground floor where the bedrooms were located was pulled up to the level of the first floor. Because of the fact that there are wide glass openings in the building, my wife asked me to effectivly close the entrance side of the house. A 10 meter wall and a drawbridge, which combines the function of stairs and a window shutter, appeared.

Location of the house on a steep slope, was followed by high risk of landslip, more and more frequent in polish mountains. As to limit the movement of the subsoil the house was treated as a bridge, under which rain water flows naturally.

Realities of mountain landscape as well as the local law constrained a gable roof. House took the form of a typical barn standing on three thin walls

To give rigidity to the building the walls were tensed by the planes of the ''inverted" roof, slightly lifted over gound. Their incline increased the feeling of security. And so, we basically created a house with two roofs that protect it from water, it began to resamble an arc floating over the fields. After some time I realized, that in order not to disturb this impression, the best garden design would be lack of it, the best fence would be a temporary herding fence, the best approach - few rocks. In the same time the building was supposed to be cheap and easy to construct. That is why I deciced on insulating it from the inside, the concrete structure became an finnished elevation. This is how I got rid of complicated details and finish, they were replaced by poured concrete from a local producer. Sprayed closed-cell-structure foam turned out to be the optimal insulation. It is also a vapour barrier.