Save
Freelancing as an Architect: The Pros, The Cons, and Tips for Success
Share
Or
Copy

This article was originally published by Archipreneur as "The Pros and Cons of Starting out as a Freelance Architect."

Freelancing can be a great option for architects looking for more autonomy and freedom in their work. Although there are drawbacks to this kind of work, there are specific strategies that you can use to overcome the challenges and uncertainties of going solo.

It is easy to look down on freelancing. Those who are employed by a traditional company or firm see freelancing as an inferior work model that automatically implies less financial security and suggests to employers a loose definition of responsibility. People often imagine freelancers as slumming it in their pajamas doing just a few hours of work per day, or as Jacks-of-all-trades, overworked and constantly chasing new commissions. While data from recent studies and surveys show that freelancers do indeed work fewer hours than those in traditional employment, the rising number of freelancers proves that this trend is not waning. In fact, according to recent reports, increasing numbers of US and European workers are choosing to go freelance.

A recent survey of the freelance economy, conducted by the NYC-based Freelancers Union and the freelancing platform Upwork, shows that the number of freelancers is growing, making up 35% of the US workforce. The survey also showed that freelancers are upping their rates and earning more than they did while in more traditional roles. Around 63% of surveyed freelancers said that they chose to go freelance, which is a significant jump from 53% in 2014. This also destroys the stereotype that freelancing is a primary consequence of the recession. Although the economic crisis did play a major role in the proliferation of freelancing, figures suggest that an increasing number of workers are not forced into freelancing by unfortunate circumstances.

Before getting into the nitty-gritty of what freelancing is, we should make a distinction between sole proprietorship and freelancing. A sole proprietor has to file appropriate paperwork with local and state authorities to register his firm and acquire the option of hiring workers. Freelancers don’t have the legal ability to hire employees. A freelancer can later choose to file the necessary paperwork to acquire a taxpayer identification number and a business license, in which case they are no longer registered as self-employed but as a sole proprietor. While sole proprietors have to register the address of their business, freelancers have the opportunity to work from anywhere in the country. Freelancers can telecommute, work from home or work part-time in an office while simultaneously pursuing their freelancing gigs outside work hours.

Working abroad depends on the type of requirements of each state, and will potentially require you to file for specific Visas and permits. Self-employed EU citizens have the right to work in any EU member state. As an EU national, you generally do not need a work permit to work in a country within the EU, with a few exceptions. There are also several freelancer associations that promote the interests of freelancers across the EU.

Some of the main advantages of being a freelance architect are: greater control over every aspect of your business, more autonomy, and less bureaucracy that comes with running or working in a large firm. Although the financial insecurity of freelancing is typically linked to the volatile relationship between freelancer and client (as opposed to established, long-term contracts with a single company), around 53% of freelancers believe that having several employers is a more financially secure option than working full-time for one business. The truth is that every job post-recession is relatively insecure, as markets change and companies close or downsize.

However, having versatility and freedom also supposes a lack of employee support, as offered in companies and firms. Freelancing can, in addition, be quite lonely. Not having the opportunity to learn from superiors and talk things through with colleagues can be an isolating experience, causing freelancers to become less productive. Furthermore, managing work hours, figuring out rates, acquiring clients and protecting work can be tricky hurdles to overcome. To circumvent these problems, freelancers are advised to follow a few key guidelines:

While there are many websites where you can find work, the best way to find work is the same as with any other form of employment: through networks, connections, and relationships with other architects, construction companies and builders. Keep in touch with former co-workers and colleagues, join professional associations, and consider teaming up with other professionals on new projects.

Figure out Your Rate

Some of the common mistakes that freelancers make is undercharging for their services, thus lowering the standard for the entire freelancing community. Set up a contract that ensures you get paid independently of the project development. Construction projects often take months to complete. If you offer design services and commit yourself to a project, you might consider asking for a monthly fee, or getting paid in installments. This will ensure you get paid even when the firm doesn’t need you at specific times, or if the project goes into overtime.

Don’t give usable digital copies of your work to anyone until you are paid. If you do give anything away, it must be in accordance with your contract. Create read-only versions of signature-protected files. Similarly, make sure to respect the intellectual property of your clients. Stealing projects, violating authorship regulations and passing off other people’s work as your own will not benefit you in the long run.

Setting up a freelancing business isn’t much different to running a firm. You’ll need expertise, a good marketing strategy, and good relationships to compete against others for work. It might be useful to start off by working full time in an office or studio before going into freelancing. This can be a great learning experience and a way to gather a number of contacts. What’s more, if you do decide to establish your own firm after a few years of freelancing, the transition will go much more smoothly because you will be aware of the similarities and differences.

Another smart strategy is to create additional income streams to support your freelancing career. Similar to archipreneurs, freelancing architects are on a less conventional career path, which brings with it a specific set of challenges. As with startups and small to medium-sized businesses, it is important that freelancers have contingency plans and income sources that get them through tough times. Start blogging, podcasting, and creating digital products to get steady income streams that free you up to work on the type of projects you want. Your brand identity and long-term success depend on it.

NewsArticlesJobsArchipreneurBusinessfreelancing
Cite: Lidija Grozdanic for Archipreneur.com. "Freelancing as an Architect: The Pros, The Cons, and Tips for Success" 22 Nov 2016. ArchDaily. Accessed . <https://www.archdaily.com/799876/freelancing-as-an-architect-the-pros-the-cons-and-tips-for-success> ISSN 0719-8884
Save 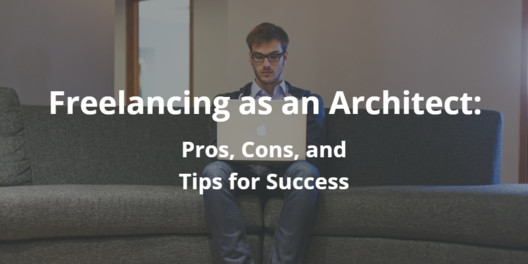