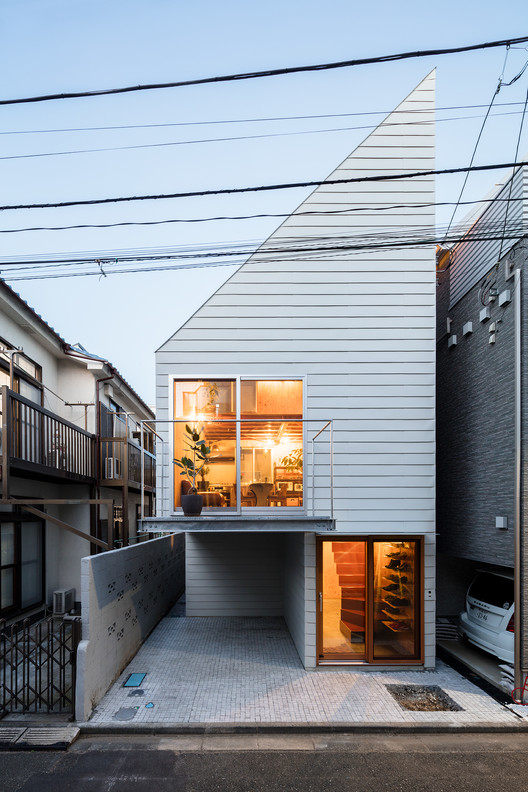 Text description provided by the architects. Young married couple building a house in the city area.

As the number of working people in metropolitan area increases, their residential areas are expanded to the suburbs. Commuting takes more than one hour and this is rare compared to other countries. People prefer to live in the convenient area ; close to the station and with good train access to the office yet those land price tends to be higher i.e. the inheritance tax also higher. So when people cannot afford the high inheritance tax, they sell at the timing of inheritance or split the land and sell.

This is about the young married couple with limited budget seeking for the convenience and habitability of the house confronting the needs of housing in this society.

Remake landscape of the town.

Site is near by lively shopping street which is called ‘Blemen street’. Originally site was split into three sites, and one of them is our planning site which is narrow grounds about 42㎡. Generally, the houses for this kind of site are designed to achieve a large floor area ratio. As a result, there are a lot of same facade house like a box built by housing manufacturers. And the skyline made by boring house is uniformed. Therefore we started to plan our small house to change the skyline and habitability. The roof was folded in three dimensions to get the afternoon sun. With that, we succeeded in removing the feeling of pressure from facade and decreasing the heat load for the house. The balcony was plan to overhang which blur boundaries between house and town. So this house got not only harmony for the town but also positiveness for the region.

One room which summarized kitchen, living room, dining room and bed room surrounded by natural light coming into the room.

From Japanese building standards law, the house which can be built in planning site is three story house. There are already three story houses in south site  and east site of our site. North site house is two story. And west side of our site, there is three story building across four meter width road. So it was the worst condition for natural lighting plan. But thankfully to our south neighbor, their house planed gable roof because of north side slant line regulation. So we plan the big windows over the hight of their roof, which can capture natural light. Thanks to these windows, the wind flows by the chimney effect in interim period, and the internal space is warmed by natural energy in winter.

We select steel structure which can realize no column space and free placement of windows. One direction is made by brace structure, another direction made by ramen structure. And the floor which is planned additional hight from 2nd floor level made by horizontal brace. Because of that, it can be flexible to use floor. The folded roof made by truss which has three dimensional rigidity, so it can decrease the horizontal deformation of top of the building.

The theme of the house is flexibility. This house has no joinery, petition wall, ceiling and receipt, because they can be changed by yourself as the family grows. If the owner wants to have shelf, they can make it. If a new member joins their family, they can add petition wall. Every time they want to change, they can customize their house. So that owner can feel an emotional attachment to their house, and continue to live in their house.

Product Description. This house has no joinery, partition wall, ceiling and receipt, because they can be changed by yourself as the family grows. 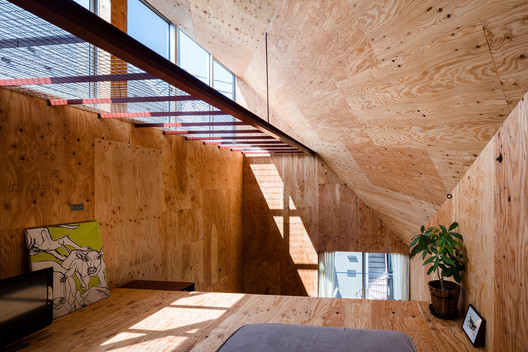