Ben van Berkel and UNStudio have collaborated with a multidisciplinary team including Goudappel Coffeng (mobility consultants), GeoPhy (data specialists) and 2getthere (automated transit systems) to produce a study examining the future of infrastructure and city development for the area around Amsterdam’s A10 ring road and the Leylaan district.

Proposals resulting from the study comprise a new multimodal transportation hub located at the intersection of Cornelis Lelyaan and the A10, and new urban districts flanking the highway that will link to adjacent neighborhoods while provided a much needed new address in Amsterdam. 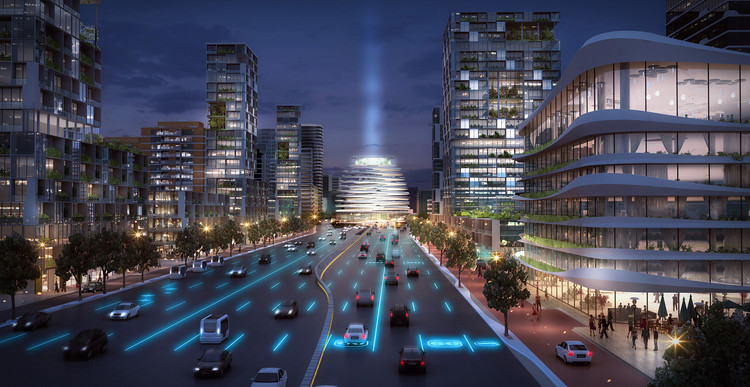 Currently, the A10 ring road acts as a barrier between the inner and outer cities, and has rendered adjacent sites as uninhabitable and vacant. As a result, the study was commissioned by The Royal Institute of Dutch Architects (BNA), in consultation with the Rijkswaterstraat and Amsterdam City Council, to discover potential strategies for revitalizing the district through an improved infrastructural system.

The result of the study shows solutions that “reconcile the disparate nature of the highway and the city through the injection of new programmes and amenities,” and reconnect to surrounding neighborhoods through increased accessibility.

The envisioned transportation hub will serve as a modal change point that will allow users to transition between different forms of transportation: from private vehicles to public transport; gas engined vehicles to electric mobility; or from driving to walking and cycling. The hub will also serve as a stop for Amsterdam’s new CityPods system, an alternative to mass-public transport that provides a direct connection to the city center.

Inside the hub, restaurants and retail will be featured to activate the space and make the district a destination. The hub will also contain a charging station for electric vehicles that could double as an energy supply center for surrounding neighborhoods during peak hours.

“We are currently transitioning into an age of on-demand transportation, where in the near future different modes of transport will be blended according to need, environmental impact, rush hour direction, traffic jams and other parameters,” explain UNStudio in a press release. “With traffic speed on the A10 reduced considerably, traffic volumes managed through innovative solutions such as flexible lanes and the implementation of new road surface and car technology that reduce air and noise pollution, habitation on the A10 will become desirable.”

The new urban developments will be organized into five new areas around the transportation hub, providing 8,400 new residential units within a total built area of 750,000 square meters. These developments could be built in phases, which would allow construction on the project to begin immediately while leaving room to adapt to future market fluctuations.

“With underground and above ground connections there will no longer be a prevailing concept of the inner/outer ring,” explain the architects. “The proposal is premised on streets and pathways that favour pedestrians, a density of people and buildings that create liveliness and a mix of uses and provision of amenities with a robust network of public spaces that allow for a strong social infrastructure and job creation opportunities.” 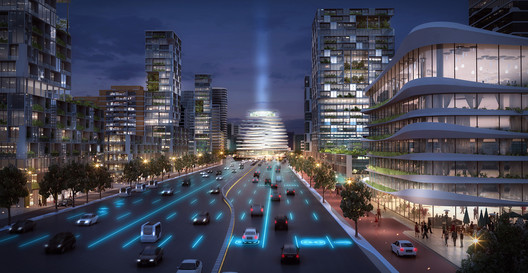