Save
BIG Joins Kuma, Perrault and EMBT in Designing Stations for the Grand Paris Express Metro
Share
Or
Copy

BIG and French studio Silvio d'Ascia have been selected to design the new Pont de Bondy metro station in Paris. The station is the latest design to be announced as part of the Société du Grand París’ Grand Paris Express project, which is seeking to modernize the existing transport network through the addition of nearly 200 kilometers of rail lines and a series of architect-designed stations throughout the city.

Of a total of 68 new stations, nine have been labeled as “emblematic,” meaning that they are expected to serve as significant neighborhood nodes within the larger masterplan. The Pont de Bondy station will constitute one of these emblematic projects, joining designs from Kengo Kuma & Associates, Dominique Perrault, Enric Miralles Benedetta Tagliabue (EMBT) and Bordas+Peiro, Agence Duthilleul, and Elizabeth de Portzamparc. 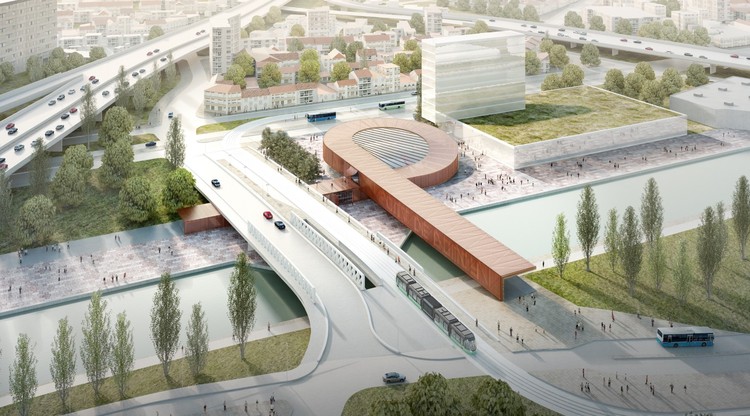 ‘Significant urban projects will emerge along this transport route: new neighborhoods with an array of features including housing, economic activities, university centers and cultural facilities – especially around the strategic, structural points provided by the stations,’ explains the Société du Grand Paris. ‘the idea is to enable business clusters to take root while rebalancing the paris region, opening it up to its more remote, isolated areas.’

The Pont de Bondy station will be located along Line 15, a ring line that passes through suburban Paris. BIG and Silvio d’Ascia’s design uses a looping form to connect upper and lower levels of the site and to bridge across an adjacent canal.

The complete Grand Paris Express masterplan is expected be completed before 2030. 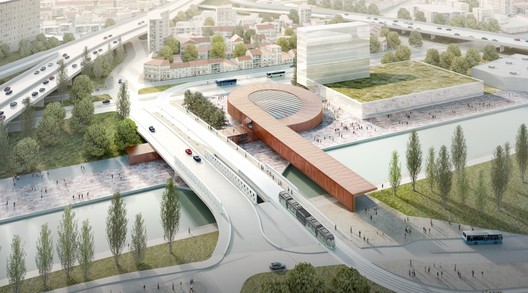