JAJA Architects has been announced as the winners of an open international competition to design a new parish church in the Sydhavnen (South Harbor) district of Copenhagen. When completed, it will be the first new church built in Copenhagen since 1989.

The competition, organized by The Danish Association of Architects, sought proposals for a 3,200 square meter church to be located on a waterfront site in the revitalized district of Sydhavnen that could be used for a range of religious, social, cultural and musical events. Construction of the church is expected to be completed in 2019.

Continue reading to see the winning proposal as well as several additional entries. 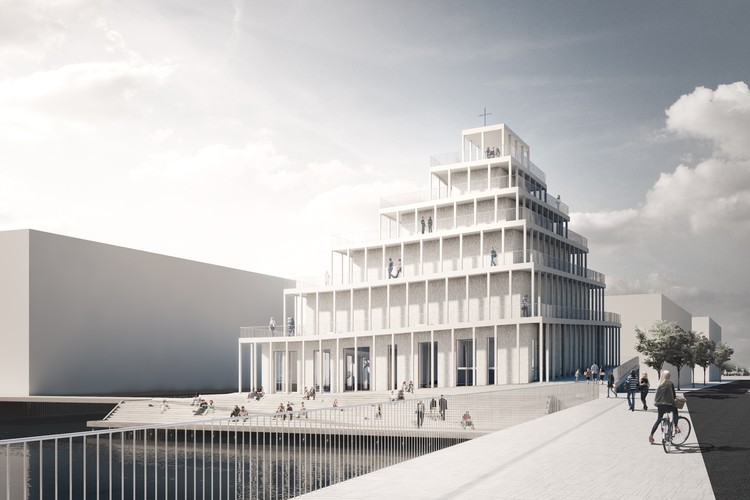 Project description via JAJA Architects. Designed as an upward-moving spiral walkway of ramps, the harbor landscape merges with the church roof, inviting the city dwellers to ascend to the top and enjoy the view. A gathering point for the congregation as well as for the whole city, the church space with its view of the city skyline becomes common property.

A colonnade following the movement of the façade from the bottom to the top forms a soft transition between inside and outside, accentuating the building entrances along the way. The spiral walkway enables direct access to all the church functions without passing through the main entrance. Various terraces form little havens along the walkway, inviting people to pause for a while and let thoughts flow freely.

The more ‘extrovert’ church functions are located on the ground floor, such as the main entrance, the café and the lively cultural spaces towards the harbor, providing active façades along all sides of the building. The nave is placed on the top floor, its inner spiral form reflecting the outer shape of the church.

Water is a universal element to the church – both by its Christian reference, but in as much as a reference to the harbor and the location by the waterfront. Architecturally, the water becomes an integral part of the church experience by letting a water spring create a flow of water basins and water gardens, as it trickles down the building from a source on top of the church to the harbor. The water experience will vary as a reflection of the weather throughout the day. Heavy rain will cause the water basins to overflow, creating a dramatic series of smaller waterfalls along the church façade. The colonnade offers shelter for the rain, allowing for poetic experiences in all weather.

Project description via Studio David Thulstrup. As part of Folkekirken (The Danish National Church), the new Sydhavn parish has an important role in Danish society and it’s immediate surroundings. The new church in the harbour district called “Sydhavn” is to house all the necessary framework for the parish daily service as well as an abundance of cultural activities for it’s citizens. The aim was to have the right balance between the public-, holy-, and a ceremonial atmosphere. It was therefore important for us that the church had the visual qualities that make it recognisable as a church, both from the street and in the church itself.

A church space has been intended as a place where the church guests have an opportunity to form a bond with the parish and celebrate some of their lives momentous occasions. From baptism, weddings and funerals, the church is designed to accommodate the full range of human emotions.

Relatively early in our design process, we took the decision that the building’s appearance should communicate its programme. The combination between a church and a culture house was very interesting to us and we felt that it should be very clear which is which. Depending on where the building is seen from, one would be able to read the programme of the building. This gives the building a juxtaposed, but a very dynamic appearance.

The choice of light bricks as the church’s facade material is chosen based on its natural and welcoming nature and connection to the greater Sydhavn context. The brick is strongly represented throughout the building, both inside and out. Other selected materials, for example, concrete, glass, metal and wood. All chosen materials mature beautifully, hold a great tactility and durability.

Project Description via Architects of Invention. This design proposes a church with a vertical emphasis, creating a distilled space for religious ceremonies, and an accessible venue to the community for a variety of activities both day and night. The proposal reflects the industrial past of the site, taking one of Copenhagen’s landmarks - Masterkraanen - as an inspiration.

Analysis of traditional church architecture (in Copenhagen especially) suggests that the organization of church buildings is mainly horizontal. Although churches themselves may be tall, there is no functional use made of the verticality of the church (except in a notional or spiritual capacity).

Taking this as a starting point, we developed the concept of a Vertical Church. This new church would be able to provide operational space for a full range of activities (mass, concert, lecture, etc.) - but as a vertically inhabited space, the building becomes more intense as well as more flexible. The skin of the building is designed as an exterior structural skeleton with a fractal pattern creating sharp shadows inside. From a distance, it appears as a blurry abstract cloud with a distinctive silhouette.

In using raw materials (wood, concrete, etc.), we preserve the stature of the building as well as making it a more sustainable project. 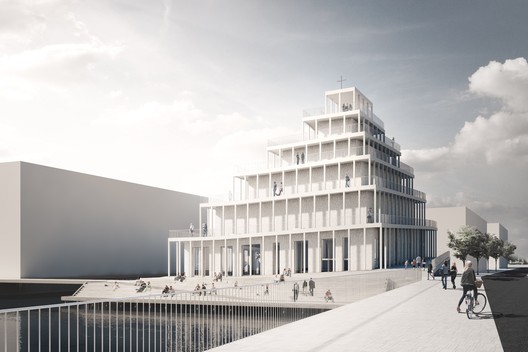