Apple has unveiled a new version of their professional-level portable computer, the MacBook Pro, making steps towards defining the laptop as a tool for those in the creative industries. With a full 500 days since these devices were last refreshed by the company, the standout feature of this latest incarnation is a new, application-specific Touch Bar – a touch-sensitive display band at the top of the keyboard which becomes an “intuitive” part of the user interface, which also includes a Touch ID fingerprint sensor. Oh – and there’s still a headphone jack!

The laptop’s display is now 67% brighter than its predecessor, with a 67% higher contrast ratio and 25% more visible colors. The computer is also 130% faster in rendering 3D graphics, and is able to be connected to multiple 5K displays making the device ideal for CAD, modeling, and high-quality video editing. But perhaps the most useful update for architects is the touchbar’s integration with many designer’s favorite tool: Adobe Photoshop.

The display and interactivity of the new Touch Bar adjusts to display only the controls needed for a particular task, such as using the Brush or Mask tools – and even provides a unique way to pick colors. You can also use it for simple tasks, such as resizing photos; “it’s a two-hand way of working. Hands and eyes work in concert,” a representative from Adobe said. According to Adobe, this new version of Photoshop will be in the hands of customers before the end of the year. 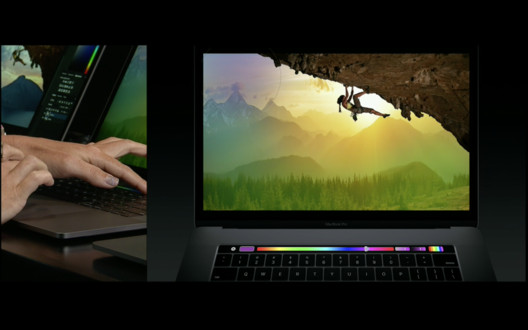