Using concrete and bricks made of raw mud, architects Solanito Benitez, Solano Benitez, Gloria Cabral, Maria Rovea and Ricardo Sargiotti built a wall able to be constructed by the two materials working in tandem. Once the concrete dries, the bricks are washed away, returning the mud back to its natural state, leaving spaces in the lines of concrete, like a kind of negative.

This artistic intervention arose from an invitation to participate in an art exhibition in Unquillo MUVA, Cordoba, Argentina from April 11 to May 3, 2014. 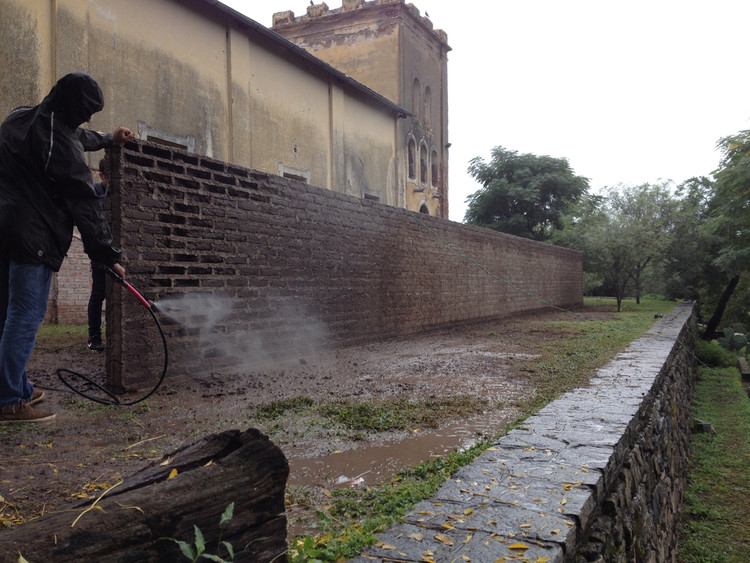 Description by the Architects. We needed an open space close to the largest exhibition hall where we could come and go easily, which is how we ended up at the stable. It’s a building that had fortunately not been well maintained and still showed traces of time on its walls: fallen plaster and sunken mortar and bricks in all their splendor. A raised walkway 1.30 meters high separates the path from the imposing side wall.

We built a wall 17 meters long on the platform, with a mesh front facing the public and a zigzagging side (to avoid having to make reinforcements or adding any anti-seismic components) which faced the stable.

The wall was built with unfired bricks, in their airing out stage, and were laid on a layer of mortar made of sand and lime that was 3cm thick. After four days, the original bricks were pushed out with pressure washers along with any other tool that could break through the thick mud bricks.

Like a mirror image of the aging stable walls, here it’s the mortar that stayed behind, working as fibers, in the best way they know how. "Taken away" lies in a sequence (that time could only have done), and returns to the earth to in its original state. It is a brick wall forever missing its bricks.