The preliminary phase of the research involved using Grasshopper to generate a network of interwoven elements and developing an automated fabrication process to bend steel reinforcement bars to custom shapes. Participants analyzed established rod bending strategies to develop an approach that would reduce the mechanical parts necessary to control the process, ultimately arriving at a systematic coordination of a bending jig system and an intelligent robotic toolpath programmed with Python. The robotic bending protocols enabled more than 80 steel rods 1500 mm long and 16 mm in diameter to be bent within the program's short time frame.

The rebar defined the form initial interwoven models, which were analyzed via finite element analysis. The resulting triangulated mesh was CNC-milled from Polypropylene sheets, which were then folded to match the rebar skeleton. Finally, a mix of concrete and fiberglass additives was poured into the steel and Polypropylene formwork, and could be cast and cured within several hours. The Polypropylene could then be removed, leaving the concrete with a reflective surface.

In past years, AA Summer DLAB has investigated the potential for computational design and concrete in a concrete dome shell and a doubly-curved wall element. In keeping with the objective of expanding the architectural possibilities of concrete with computational design and robotic fabrication, the continued research looks toward exploration with simple mechanical tools and cost-effective fabrication methods. 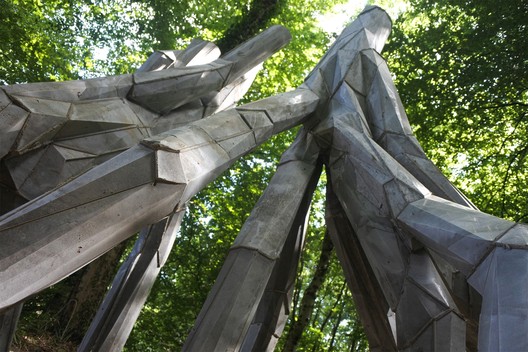