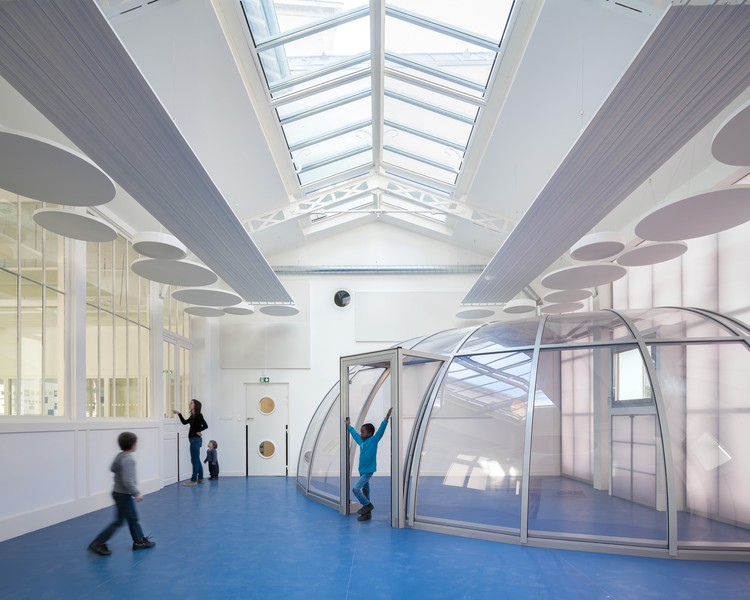 Text description provided by the architects. The nursery Jules Guesde, built in 1898, is the first Paris public nursey dedicated to small children built with the objective to reinforce the care, sanitary protection and wellbeing of new born and very young children.

The original building is representative of a “generous” architecture which sought, in line with the initial hygienist ideals, comfort, health and wellbeing for the occupants and quality of air which did not exist in the majority of homes at that time.

Our project of rehabilitation aims to achieve the following objectives:

Street Side Courtyard and the New Entrance
The original brick street facade is richly decorated with polychromatic multi-materials with ceramic floral motifs.

The new entirely glazed facade for the lower ground floor opens out completely and offers a maximum of natural light into the internal spaces including the main entrance hall.

Street Facade
The design intent for the project is seen in continuity with the original building, taking into account the value of its architectural heritage and its intrinsic qualities (volumes, and natural light penetration).

At the same time, it introduces contemporary elements which, inspired by the vocabulary and characteristics of the original decorations and playing with the reference to the world of plants as a leading thread, translates and presents them in the global project.

For the lower ground floor facade this play on references is expressed in the tree form of the new steel columns supporting the facade above and which seem to extend the plant form decorations to the ground below, making them “take root”.

Rear Courtyard Facade
The same creative spirit and architectural treatment gives life to the rear courtyard. The existing blind facade is transformed into a translucent envelope of polycarbonate with a metal mesh serving as brise-soleil allowing natural light to penetrate internally.

The mesh, laser cut with tree form shapes, botanical references and enriched with recognizable forms of animals, projects these forms in a shadow play through the polycarbonate.

The effect obtained internally suggests an exterior open and natural world, whilst outside the forms and textures of the mesh, directly accessible to the touch and views of the children, constitute for them an interesting sensory and cognitive experience.

Treatment of Internal Spaces
Our project has integrated the quality of the original generous volumes and maintains the original structure and the largely glazed partitions allowing natural light to penetrate deep inside.

At upper ground floor, in the volume under the restored rooflight, the sleeping space for the “middle children’s section” is accommodated under an igloo shaped structure naturally lit by the new polycarbonate facade.

Product Description.The EVERLITE DANPALON façade facing the courtyard allowed us to transform the existing opaque wall into a translucent backdrop of polycarbonate with an external metal mesh serving as brise-soleil.

The polycarbonate allows natural filtered light to penetrate the large volume under the skylight.

The mesh, laser cut with tree form shapes, botanical references and enriched with recognizable forms of animals, projects these forms in a shadow play through the polycarbonate.

With an external space surrounded and constrained by imposing buildings the effect obtained internally suggests an exterior open and natural world, whilst outside the forms and textures of the mesh, directly accessible to the touch and views of the children, constitute for them an interesting sensory and cognitive experience. 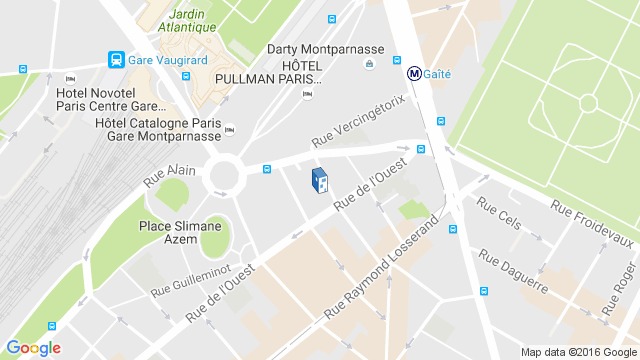 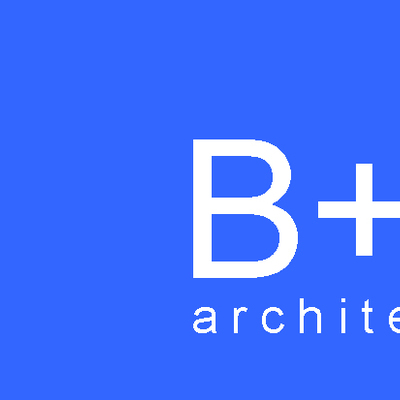 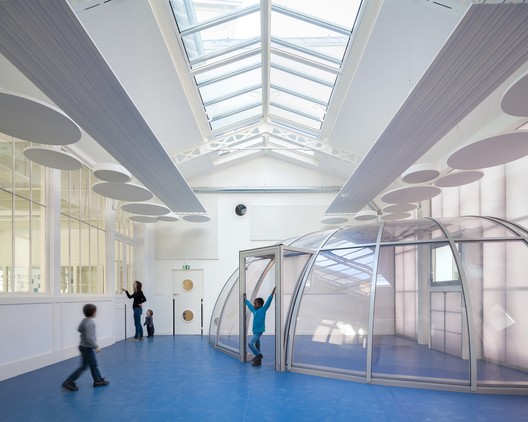