The young Álvaro Siza Vieira, then 26, was called to make salt water pools along the shore at Leça da Palmeira in Matosinhos, Portugal. The facility, which was completed in 1966, is made up of changing rooms, a café and two pools- one for adults and one for children - and became one of Siza Vieira’s most recognized projects, classified as a National Monument of Portugal in 2011. 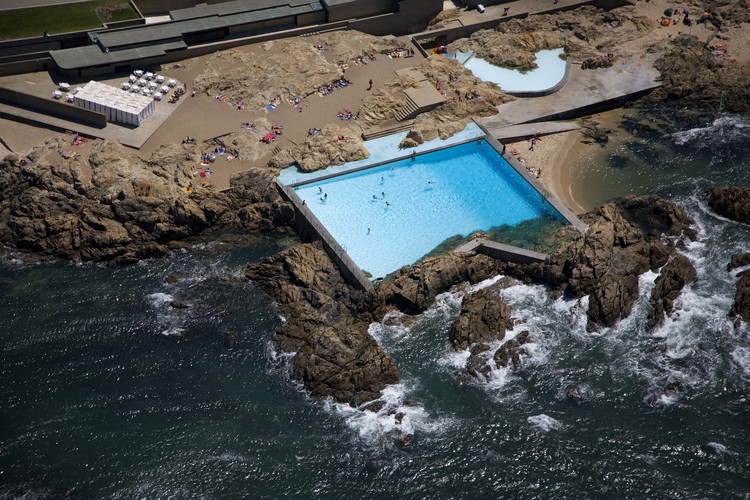 The design takes advantage of natural depressions in the rocky terrain and embeds basins of salt water. The pools reach the ocean and mingle with other natural formations present along the coast of Matosinhos. The volumes are integrated into the landscape, hiding it and framing it at times, but clearly highlighting this human intervention on the natural site. Siza created a deliberate contrast between the organic stones and the sharp geometry of his architecture.

The building is arranged parallel to the walkway, leaving the horizon completely unobstructed from the road. Access to the facilities is via a subtle ramp that gradually hides the view of the traffic and the ocean. This transition between the road and the sea stands out as a sensory experience - as you travel down the walkway the ocean becomes less and less audible. When leaving the changing rooms, one enters into a series of platforms and the water again becomes the dominant view, the pools appear between the vast ocean and the complex. Formed by low concrete walls, natural rock formations are scattered along the edges of the pools which merge with the ocean horizon. This intentional vagueness blurs the real understanding of the boundary created and visually increases the length of the space.

The complex is made of concrete, with exposed wooden beams. The tone of the concrete used is slightly lighter than the rocks on the ground, showing the presence of man in the natural environment. The covers are made of wood, covered with copper plates on asphalt screens.

The building’s 50th birthday is being celebrated with a restoration project, with simple interventions in the building - which remains in use. In addition, there will be a book launch  "Piscina na Praia de Leça -- The Pool On The Beach" with drawings, photographs, memories, and texts from Siza himself as well as other authors. 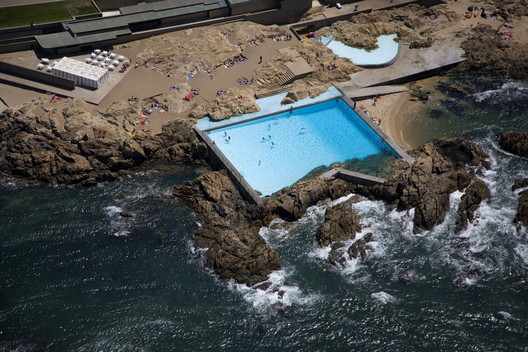