Two-thirds the scale of the original, the reconstructed arch was carved from Egyptian marble blocks using a team of Italian stone-carving robots, which followed a 3D model of the arch assembled from photographs taken of the structure prior to its demise.

For centuries, the 1,800-year-old arch served as the entrance to the Temple of Bel, the center of religious life in Palmyra. Even after the city’s abandonment, the monument remained an important example of Roman architecture in the Middle East.

The Arch of Triumph will remain in New York for one week as it coincides with the United National General Assembly, before traveling to its next location in Dubai.

#UAE Minister of Cabinet Affairs and The Future, Mohammed Al Gergawi participates in an installation of a reproduction of the Arch of #Palmyra (original destroyed by #ISIS in Syria) in front of City Hall in New York City, says, "with this installation the message is clear; whatever they [ISIS] destroy, we make sure to rebuild. Whatever they are trying to erase from our humanity, we make sure to save it. This is our fight against extremism" #UAEUSA #NYC #UNGA

The project is the result of a collaboration between archaeologists at Oxford University’s Institute for Digital archeology (IDA) and United Nations Educational, Scientific and Cultural Organization (UNESCO) to preserve the historic architecture of threatened or destroyed sites through the digitization and recreation of their artifacts.

Read more about the project, here.

News via the Guardian. 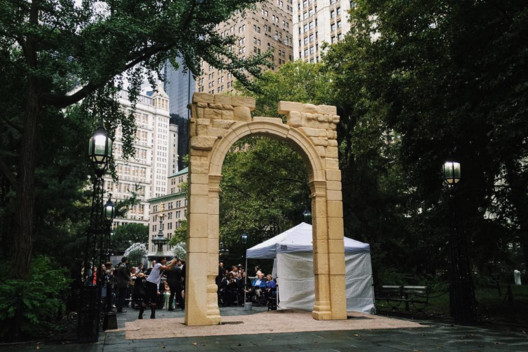