Text description provided by the architects. Museum De Pont is renovated and expanded with 1.100m2, designed by Benthem Crouwel Architects. Also, visitors to museum De Pont now enter the forecourt through the new entrance gate, consisting of several interconnecting passages. The open structured passages, so called 'follies', each have their own specific function. The gate is part of the adaptation of the entire forecourt and was donated to the museum for their 20th anniversary by the municipality of Tilburg.

Expansion of the Museum
The new wing of the museum is adjacent to the museum garden and hosts mainly film, photography and video art. The exhibition space is 20 by 27 meters. The new hall provides additional exhibition opportunities for the growing collection of the museum. The new restaurant has an adjoining lounge - including a fireplace, which connects beautifully to the museum garden. The restaurant has been enlarged and has a central location between the old building and the new wing. The characteristic line of sight along the original outer wall of the museum remains intact and is well adapted to the current museum route. Because of top windows, which make the spaces spectacularly bright, the ceiling almost seems to levitate. The museum shop is enlarged and is connected to the library. The recent adjustments create a much more logical sequence of public functions: entrance hall, bookstore, library, restaurant, lounge with terrace and museum garden.

Follies
Already in 1990 the municipality of Tilburg commissioned an urban plan for this location, also with the goal to create a worthy entrance to the street. The urban plan has been executed in phases and now, a characteristic gate has been completed. The five follies share the same design idiom. The height of the follies is related to its surroundings and is determined by its functions: driveway for busses and cars, entrance for pedestrians and a bicycle parking station. The passages are made of concrete, in a cut-away diagonal structure, and are coated with a ceramic material. This durable material has the same industrial look as the expanded metal façade of the museum. The contours of the gate are an interpretation of the original buildings around the museum. There is also a new layout for the car park, because of the increasing number of visitors. With the redesign, particularly the entrance gate, the original structure of the area is restored. Advertising facilities are integrated into the follies, as well as lighting, making the forecourt a pleasant area at night.

De Pont since 1992
Museum De Pont is located in a former wool mill. In 1990-1992 Benthem Crouwel Architects rebuilt the monumental factory from the thirties to a space where contemporary art can come into its own. The highlight of the factory is the large bright main hall - with on one side the intimate wool-storage rooms. In the hall are twelve skylights over the entire length of the building, which provide natural lighting and atmosphere in this unique space. 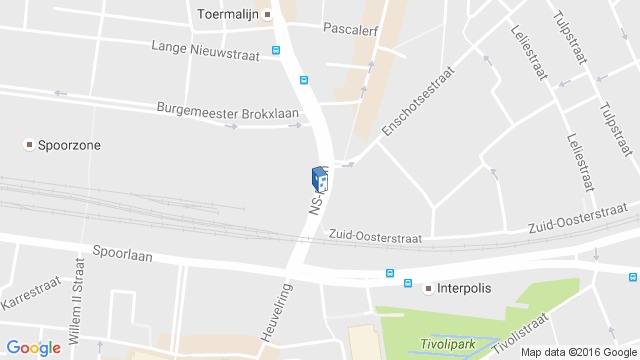 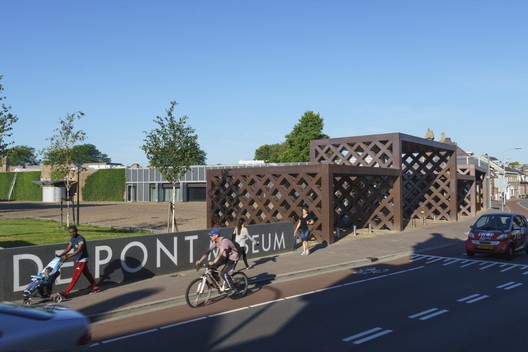