Save
House in Leiden / Samf 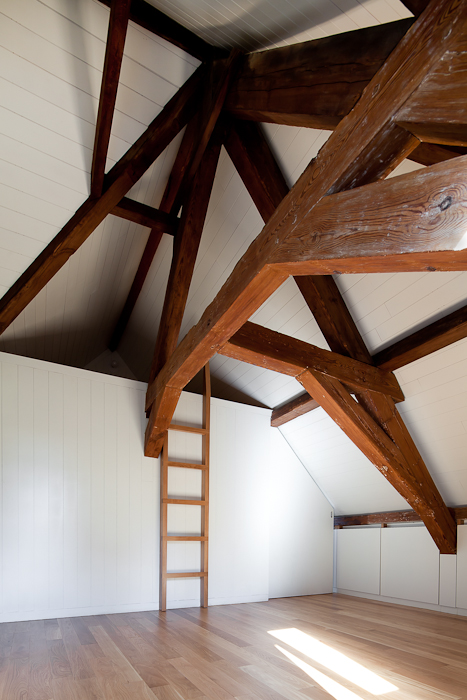 Text description provided by the architects. This house in Leiden, NL, is integrated into a large 17th century stable whose use has been altered to accommodate six different houses. In this long process of residential occupation, internally, the original clarity and direct quality of the construction had been lost. The renovation essentially sought to clear the space, which was excessively partitioned, so as to regain a unified vision of the house and rediscover its character and spatial qualities.

In the ground floor, the kitchen and living space form a large open space, concentrating the functional areas and places to stay along the perimeter. The walls are thus given a new thickness with built-in cabinets for the kitchen, a secret storage space under the staircase and a stove to gather around.

Above the bedrooms in the first floor is the attic which is the most surprising element of the house. It is reached by a cramped spiral staircase, and before you access the main space, you enter a small, confined, wood covered box. This is the technical area of the house, with the heating system, washing machines and a working table. By contrast, the living area is open and white, except for the old roof beams, dark and rough. Again, all the storage space was placed along the edges, close to the floor, under the horizontal beams. Over the entrance box is a gable-shaped space that can be used as a bedroom, which is accessed by vertical ladder.

Because the roof structure was built for a single building, which has been sliced into six, at first it is hard to understand the logic of its construction, especially in this case where the roof occupies one corner of the original rectangle. But part of its interest lies precisely in trying to reconfigure in our head, from the intricate three-dimensional structure of struts and beams that we perceive, the overall design.