Mecanoo has unveiled the designs for the new Ede Wageningen Train Station in the city of Ede in the Netherlands, after winning the competition for the design of the project in 2014. As a gateway to the Veluwe National Park, the transport hub is designed to support future expansion in response to growth in passenger numbers.

Inspired by the local Veluwe landscape—its topography, typologies, and existing buildings and monuments—the Station building is nestled in the slopes of the moraine between the Veluwe Massif and the Gelderse Valley.

The wooden clock tower and roof of the project serve as the station’s hallmark. Consisting of a series of wooden triangles, the roof cascades over the bicycle parking, retail space, and other station facilities, ending as the overhang of the main entrance and connecting all quadrants of the hub in a uniform manner. 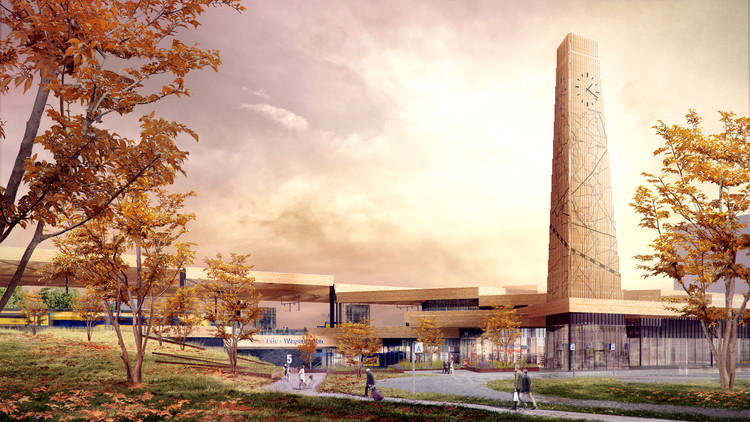 The use of natural materials like wood, stone, glass and steel fit the Veluwe landscape. The sturdy detailing makes the design not only durable but also resistant to vandalism - said the architects in a press release.

Furthermore, the shape of the roof, as well as the platforms’ outfitting are designed to support the sightlines and orientation of travellers, thereby supporting safety and navigability.

From the platforms, all transport modes can be seen: the station square, buses, drop off zone, taxi rank, and bicycle parking. A large indoor parking facility has been integrated into the design and can accommodate up to 6,000 bicycles. A large car park is located at walking distance from the main entrance. Circulation routes are intuitive, covered and well-organized. The station is seamlessly integrated into the existing network of streets and roads, separating slow and fast traffic - described the architects. 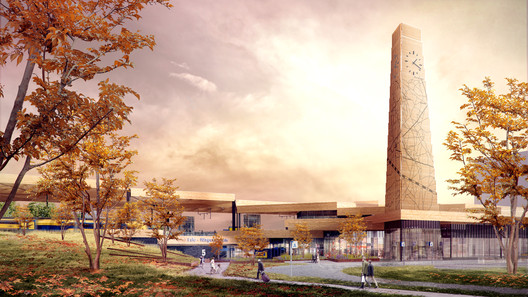