Architecture competition organizer Bee Breeders has announced the winners of the international Iceland Trekking Cabins competition, which called for entries to design a cabin with provision for enclosure, place, and social collectivity. As a structure for nomads and backpackers, Iceland Trekking Cabins are associated with cultural folklore and exist within the context of fjords, lava fields, glaciers, mountains, and the respective trekking ethos.

The competition furthermore sought projects that are “a supple and dexterous yet protected architecture, sensitive to the landscape though guarded against its severity, accommodating for the community, but in the company of strangers.”

The winners of the Iceland Trekking Cabins Competition are: 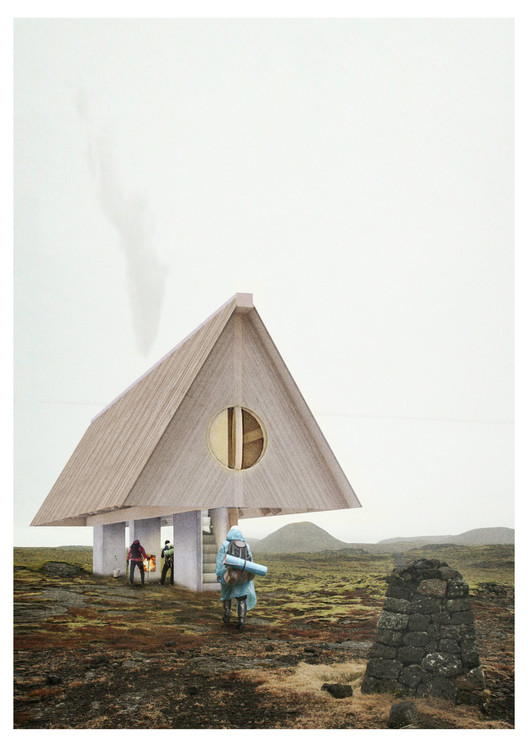 First place is awarded to a project distinguished by its clever articulation of the most basic elements of shelter — the roof and wall — to create a fully immersive experience. The shelter presents itself as an expansive roof, allowing the textured landscape to permeate through. Supporting the roof, gabion walls from local stone rise from the ground, appearing as pre-existing relics in the landscape. Arranged into three distinct volumes, the walls create both interior shelter from the elements and exterior gathering space. Elevated wooden platforms are inserted as needed in the interior, providing reprieve from the elements, leaving the local terrain largely untouched. The weight of the roof and walls celebrate permanence, while the porous quality of the material and spatial sequencing open the project to the transitory nature of the landscape.

It is in this delicate balance between rigid structure and an untouched landscape that the project finds resonance. The play between manmade and natural heightens the visitors awareness of surrounding, allowing protection from the elements while still remaining fully engaged within the environment. In a landscape where the temporal patterns of hiking and camping are lauded for a leave no trace transience, the shelter challenges the perception that permanence and obstruction necessarily go hand-in-hand, developing an architectural language that both monumentalizes the act of camping and allows natural systems of the site — animals, hydrology, and fauna — to flow through uninterrupted.

The success of the second place proposal for the Iceland Trekking Cabins competition lies in its simplicity and strength of parti. Three aligned and evenly spaced concrete cores contain the circulation, hearth, and bathroom of the cabin and also serve to elevate the structure above the ground. The light touch of these primitive elements on the fragile ecological landscape serves a triple function: allowing for extra shelter beneath the structure, creating a public gathering space, and solving the difficult problem of maintenance under heavy snow conditions. Materially, these cores are rendered as unapologetically raw concrete, an admission of the manmade substance of the structure in relation to the wild nature it sits upon.

The elevated portion of the structure is enclosed in a pitched wooden roof, evoking the dual vernacular of both provisional shelter and agricultural structures indigenous to the region. In addition to the plume of smoke issuing from the hearth and through the roof, the iconic symbol of the circular aperture inscribed in each gable acts as a simple lantern in the distance, beckoning the weary traveler. Once again, the parti presents its strength in the plan of the sleeping quarters: relating the structural bays supporting the roof to the dimension of the reclined human body and ordering the bunks around two shared public spaces flanking the hearth. This interior organization creates a harsh split between the space of the human and the terrain of the land, its interiority evoking the radical absence of the ground plane. The project thus proposes a prototypical shelter, but fine-tunes it to the fragility and potency of the Icelandic terrain.

The third place entry for the Iceland trekking cabin proposal sets itself apart in the use of cabinetry as a language to create shelter. Through the dimensional unit of the tatami mat, the project creates a modular furniture system that defines the perimeter of the shared central space, creating a gradient between the common dining area and private sleeping cells. The furniture units are comprised of lightweight plywood and are a collection of bed, window, entry, and kitchen modules: each cabin unit can be adjusted, reoriented, and scaled to adapt to the uniqueness of the Icelandic landscape. This kit of parts is clad in polycarbonate skin, a material that in its obscuring translucency and reflectivity, mirrors the mercurial atmosphere of the Nordic sky. At night, it functions as a lantern, marking the terrain through the light that spills from its clerestory.

It is in this simultaneous suppression and celebration of the architectural object that a spatial nuance is added to the proposal. The project is an interrogation of interiority, using the device of the inhabitable cabinet to define and engage the public-private dichotomy of domesticity. A collection of discrete pieces, the furniture modules provide the infrastructure of the living space. Through the system’s logic of aggregation, the modules reinforce the frame of the cabin, leaving a generous space in the center for collective activities. Unifying the assemblage of furniture modules, the polycarbonate shell opens the interior to the landscape, enlarging the volume of the cabin and bringing in light, color, and texture of the Icelandic sky.