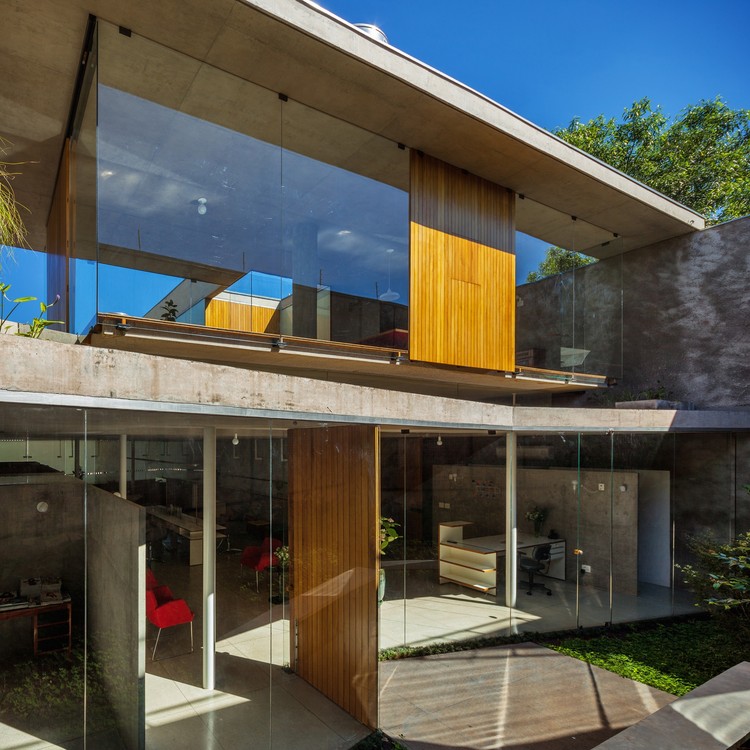 A proper balance as a goal
Two activities: live and work. Its two corresponding spaces, house and studio, have been shaped historically, as two quite clear architectonic typologies.

Our first goal to this project was to combine both in a single small building, firstly keeping their programmatic independence and secondly achieving a proper balance in the whole [not a house with a studio appended, neither a studio with an added house].

It means, we would like to integrate both programs in such a way that both could live together with no conflicts. The studio should not be disturbed when the house is empty. In the same way, the house should not be degraded by an uninhabited studio.

Studio
The studio was disposed 1m lower the street level as a strategy to change the typical perception of a full-story building, then its function does not dominate the building.

Moreover, it is turned to the site's rear.  In particular, a transparent façade enables the studio to benefit from a small garden conceived there.

In between the studio and the house there is an empty space that clarifies the independence of the two programs.

House
At the west plot limit, the house entrance leads to a single-floor house, spread in the second level slab. The bedrooms are situated at the front side and the living room towards the rear. Connecting bedrooms and the living-room are the kitchen and service areas.

The reflecting pool mitigates the severe local weather and multiplies the light in the house patio. In addition, it assures the impermeability of the concrete slab, free of any membrane, and works as thermal insulation for the studio.

The house's design aimed for no evident architectonic elements like doors and windows. Thus, its function is not apprehended at first glance in order to not prevail over the studio.

Two major construction materials
Both programs are being built with few major materials: glass and concrete.
This conciseness is a strategy to keep construction process and costs under control. 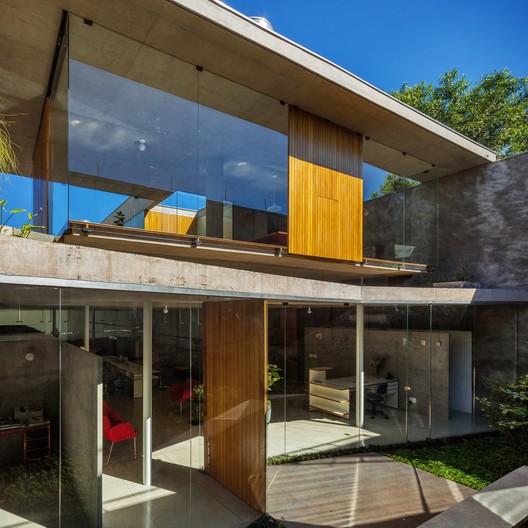