Lilas, Zaha Hadid Architects’ design for the 2007 Serpentine Gallery pavilion, has been reinstalled at a new location on the south lawn of Chatsworth House, the Derbyshire home of the Duke and Duchess of Devonshire. The mushroom-like pavilion has been put on display as part of Sotheby’s annual Beyond Limits sculpture exhibition, and is for sale through the international auction house.

Already having designed the inaugural Serpentine Gallery Pavilion in 2000, for the 2007 edition, Zaha Hadid Architects designed Lilas after rising steel prices delayed the construction of the proposed design from Olafur Eliasson and Kjetil Thorsen.

“It was one of those little miracles,” she said. “It was uncomfortable to be in the position of not having a pavilion on time that year – [but] stuff happens and it is how you deal with it that is the major issue. As a result we had this gorgeous project that was unexpected and it was an absolute little gem… so typical in its simplicity and so relevant to her work.”

Now re-erected at Chatsworth House, the pavilion can be appreciated in a new light through the contrast with its traditional surroundings, a juxtaposition of styles Sotheby’s curator Simon Stock says “complement in a way the pyramid does at the Louvre.”

A cost for the structure has not been released, but it is expected to fetch upwards of £500,000, the amount reportedly exchanged for Sou Fujimoto's 2013 pavilion. 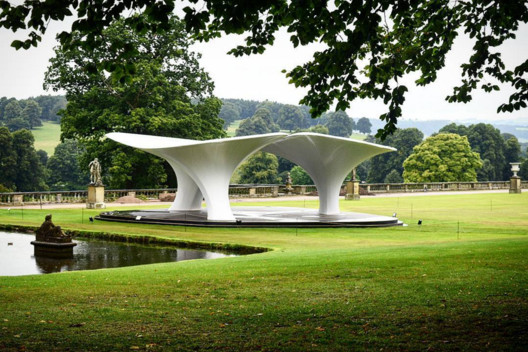