Open Platform for Architecture (OPA) has released designs for the latest in their series of cliffside buildings: Lux Aeterna / Holy Cross Chapel. Similar to their previous project, Casa Brutale, the chapel employs a style referred to by OPA as “Transcendental Brutalism,” and has been embedded into the side of a cliff. The front profile of the building takes the shape of a cross, to be a seen as a spiritual beacon as it is approached from the water. 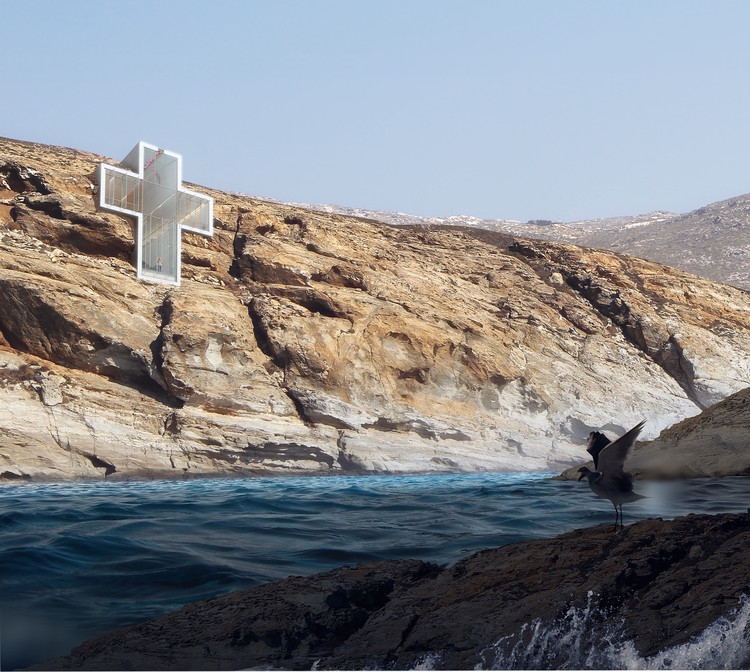 According to OPA, “Purity of belief is celebrated in this minimalistic design devoid of earthly distractive elements. The chapel is the third building of the Terra Mater trilogy of underground buildings. Proposed for the island of Serifos, it possesses a single cliff façade that faces the Aegean sea, positioning the human vis a vis with the beauty and magnanimity of creation.”

The proposed chapel would be constructed with simple materials: wood, glass, and, of course, concrete. These textures match the surrounding arid landscape, giving the project the appearance that it is of the earth.

The cross shape continues into the building, organizing the space into three sections – a common division of church architecture. Yet instead of splitting the space horizontally, the function has been separated vertically.

OPA explains, “To this date, the cross has only been incorporated in a horizontal orientation in the design of cross-shaped floor-plan churches (Cross-in Byzantine rhythm). Apart from this historical use, cross-shaped openings are also used as  illuminating features on the walls of several contemporary chapels.”

The building benefits from the the thermal insulation created by the surrounding earth, allowing the interior temperature to remain at a comfortable temperature passively. As in many spiritual buildings, light is given a heightened importance.

“Eastern light penetrates the chapel through the front glazed façade and the tinted “vitreaux” glass that runs along the spine of the building, culminating to the western façade with the rotating wooden door. The dynamic light patterns embrace the bare concrete with colorful refractions, a reverent homage to Le Corbusier’s “Ronchamp” church and Tadao Ando’s “Church of Light”. After passing  the wide, cross-engraved rotating door (bearing it’s the axis in the middle) you encounter a breathtaking view of the sea, while you are spiritually transported by the solemn and transcendental atmosphere.”

At night, the chapel is lit, becoming the brightest object on the horizon where it can serve as a “lighthouse” for seafarers.

OPA gives special attention to the material quality of the interiors as well:

“The remaining space is bare, pure and humble allowing for quiet and tranquil contemplation and prayer. The Holy table and the auditorium, which is comprised of concrete benches finished with warm wood, are complementary to the simplicity of materials and design.”

Other envisioned features include traditional orthodox frescos, a sanctuary and a display area imagined to house objects like the Evangelion and the Holy Grail.

Casa Brutale is Getting Built, and Here's Why (Hint: The Internet)