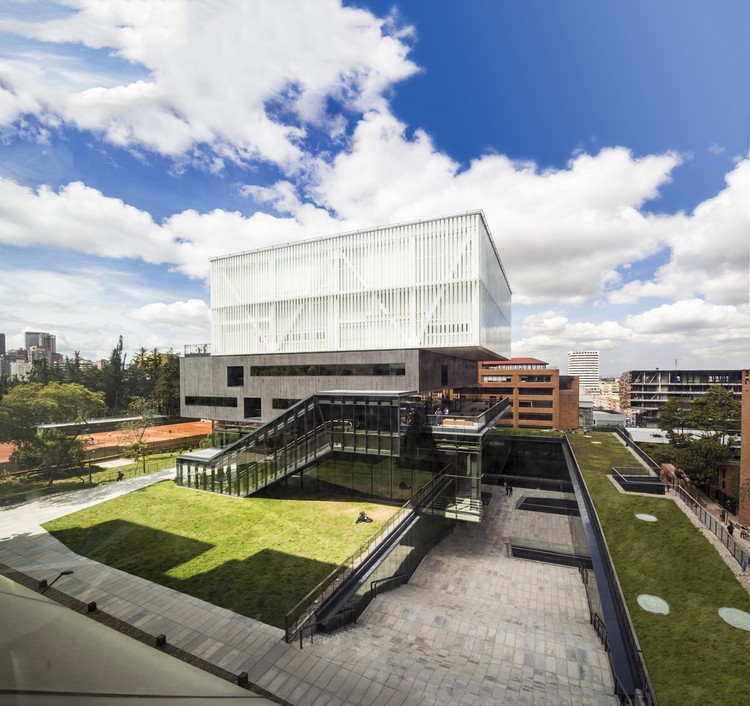 Text description provided by the architects. Art, the new face of academia to the city.

As part of an ambitious master plan, Pontificia Universidad Javeriana has been conducting a series of architectural competitions with the aim of boosting its urban and architectural development for the next 20 years in a spirit of high creative, spatial and technological quality. Gerardo Arango S. J. Building, home of the School of Arts was the first in this series of buildings by competition and as such was intended to represent in its location and construction these new values that the university wanted to project to the city and the country.

To this end the southern edge of the campus was chosen, in direct relation to Enrique Olaya Herrera National Park. From early on the project took as its greatest asset this privileged location and entered the competition as the new door to the university that is open to the city through the park creating new roles for the university as an open and highly active institution in Bogota.

The project is a new stage for the arts and innovation thus enhancing the natural condition that the park has to collect and concentrate different activities of social and urban life of this capital city. We have designed a building for the creation of new arts that supports diversity and enhances social exchange through art as a tool for reflection of the new realities that the country is ready to face.

The implementation and arrangement of the parts of the building has the additional attribute of integrating into a new public space the buildings that circumscribe it on the north, east and west sides. Tower and platform are the elements that enable the project to achieve this goal. A platform that is very closely linked to the park and topography and is above all the extension of public space between the university and the national park as a new plaza. In the center of this new public area grows the tower that finishes configuring the plaza to relate buildings that surround it, generating a new scale for the whole.

The tower is in turn divided into three volumes representing in their materiality and disposition each of the disciplines that make up the proposed school, generating a set of three autonomous worlds that are related through circulation, gaps and perspective connections vertically throughout the building.

Following this logic, the world of visual arts associated with light is arranged in the last levels to take advantage of natural light through the overhead lighting provided by large skylights along with a translucent facade built from U-Glass that allows natural light to fade evenly. The classrooms are designed as flexible, generous and high spaces, with finishes that have been designed so that students can intervene them freely.

The second world, of silence and music, is constructed as an introverted space in gloom that offers a more private experience, a propitious space for music practice, for this reason the materiality of it has been thought of as more dense and solid. for which we use GRC panels on the facade and interior walls, which together with fewer openings to the outside gives that particular atmosphere to the building.

On the platform, dominating the new horizon that the building proposes and relations with the outside, a transparent and multiple world, a double-height space that allows the relationship between the three disciplines, a large gallery as a backdrop to the park and the city where students can dialogue through art with established artists.

Finally on the platform we locate the world of movement, represented in the performing arts and for this purpose contains large classrooms and auditoriums as well as the administrative offices of the school that are separated from the classroom by a large interior staircase as an open street that draws the topography and is offered as public bleachers in direct relation to the exterior surface. These worlds are offset in large overhangs of 5.5 meters to the south and and north forming access thresholds as well as large urban balconies and generating space for peripheral stairs ascending in a spiral, promoting a space with movement, clear spatial contrasts in the atmospheres of each discipline and in relation to the distant landscape of the city. 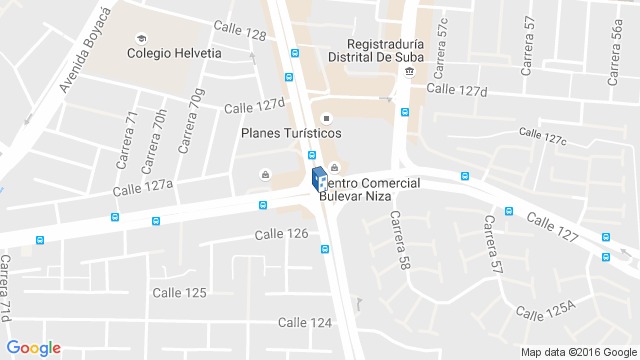 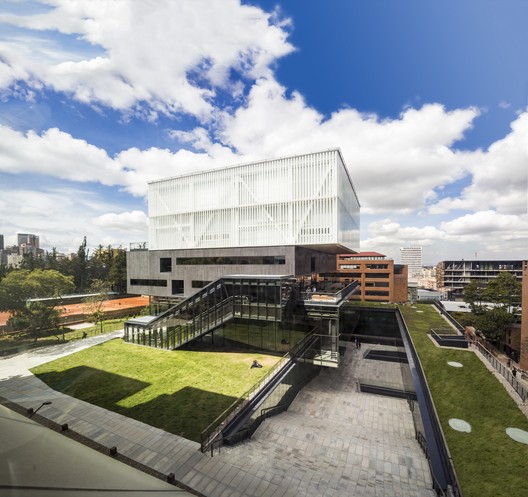