A few months ago we put out a call for the best architecture résumé/CV designs. Between ArchDaily and ArchDaily Brasil we received over 450 CVs from nearly every continent. We witnessed the overwhelming variety and cultural customs of the résumé: some include portraits, others do not; some include personal information about gender and marital status; others do not. In the end, however, we based our selection on the CVs that stood out from the hundreds of submissions. We looked for CVs that transmitted the personality of the designer, their ability to communicate visually and verbally, and perhaps, the most intangible criteria for evaluation—the "creativity" of the CV. The documents below represent the diversity of styles and formats that just might land you a job at your dream firm.

But before we get started, we thought we would take this opportunity to present our top tips for designing your own résumé:

About the design: "How could a résumé describe a candidate and be simple and clear at the same time? We have to make a choice. Mine is to use a very simple layout, working only with different heights and weights of one font. The résumé is only one part of the presentation: a QR code leads to a complete portfolio on the web. We live in a connected world. I think also the résumé has to express it." - Andrea
Why we like it: While simple, we love the impact of Andrea's font choice and sizing, and the QR code is a great addition—it operates as both a zeitgeisty aesthetic addition and a functional way to communicate more about yourself.

About the design: "This design was intended to be straightforward which captures the designer profile in one shot, through the use of pairing fonts to make each sections individual, yet harmonize with the entire flow. The color use is to allow the employee or interviewer to understand the interviewee strengths and weaknesses at a glance." - Bernadette
Why we like it: On an otherwise understated design layout, the presentation of the skills really stands out here, with the colorful icons grabbing the reader's attention. As mentioned above, we're not sure about the practice of rating your own skills numerically, but if you must do so this is the way to show it off.

About the design: "minimalism" - idan
Why we like it: Well, I suppose we couldn't have said it better ourselves. This design speaks to the architect's innate minimalistic taste.

About the design: "Love what you create, Create what you love, Inspire the world" - turgut
Why we like it: Though deceptively simple in layout, this design is undeniably striking, thanks to the well-chosen image which grounds the entire page—while also providing a simple color scheme to highlight the skills section.

About the design: "I wanted to make something brief and eye pleasant with only a small touch of blue to stand out." - Alfonso
Why we like it: Alfonso's design cleverly uses a variety of different text formats, with text size, weight and color, all contributing to organize information effectively. Plus, we can't fault the color scheme. ;)

About the design: "Very simple résumé, inspired by school of Bauhaus, for those more traditional ones." - Ewa
Why we like it: We can't imagine an architect who wouldn't break into a smile upon receiving this résumé and spotting all the Bauhaus references.

About the design: "Curriculum vitae as landscape." - Erik
Why we like it: Unquestionably the most creative design we were sent, this one takes a while to understand. Normally, that's not a good thing—but in this case the effort taken to interpret the information is well worth it.

About the design: "My design aesthetic is centered around the use of color as expression, and the division of subject matter. I still have things to learn and enhance, in terms of my own résumé, but the most important thing in the creation of a résumé is the acknowledgement of how you are (and how you spell your name) and what you stand for. That said, I focused the majority of my résumé around my volunteer experience and my skills. Places these features next to each other is my own attempt in stating the relative nature and how two and two may work with and within another. They are also what makes me a potential asset and can be seen as the forefront of my digitally paper-based identity. Other than that, I consider these three things to be fundamental: fun, font, and flow. Sorry for the cheesy ending." - Bryanna
Why we like it: This modern-looking design shows off many different, innovative ways of displaying information—so much so that we're inclined to believe Bryanna's claim about her own PowerPoint proficiency.

About the design: "A balanced asymmetric design, organized by a varying hierarchy of lines." - Alex
Why we like it: Just as Alex points out, this design is all about the power of the line. With the connection between organizational importance and lineweight, there is even a sense of an architectural drawing about this one.

About the design: "The concept of my résumé is inspired on the life of the graduate student: a young person who always wanders into the world with his résumé in the backpack searching for new possibilities. With this résumé I don't have to bring around my A4 notebook all the time to keep it safe, but just a small envelope! The design is exactly like its concept: clear, simple and effective. The graphic is based on grayscale in order to keep its efficacy also when printed in black and white." - Gaia
Why we like it: We love the way that experience has been presented as a journey here. And, while it's probably not something that would be noticed by a prospective employer, the practical considerations that lend themselves to an adventurous, semi-nomadic lifestyle are a nice touch.

About the design: "Simple single color approach to stress importance of certain elements of my résumé. Use of modern day communication visual style to introduce myself and bring readers into the rest of my résumé. Designed to be read from a pdf reader on the computer with guidance to scroll down to read more into the next page." - Daniel
Why we like it: It's great to be aware of the medium your résumé will be read on, so the way that this design is optimized for pdf is a nice touch.

About the design: "The design of the résumé was divided in half to tell two stories. On the left, an introduction about my design philosophy and skills were depicted to illustrate my personality and strengths. On the right, chronologically I have portrayed my Education, work experience and Achievements during my undergraduate studies. In addition, using the black and light blue allowed me to create a résumé that stood out from the typical black and white résumé, and is interesting to read. Overall, the intention of the graphics were to be bold, simple and clear to understand for any architecture and non-architecture related professionals." - Mario
Why we like it: The use of the central timelines here is a great example of an informational tool that doubles as an organizational element. On top of this, the clear color scheme and bold icons make this design extremely clearly presented.

Why we like it: This résumé, in spite of its deceptive simplicity, tells a story and is full of personality. It took us on a journey, showed us the candidate's attention to detail and graphic acuity and maintained the age-old architectural black and white aesthic.

About the design: "In this résumé, a graphically-bold name stands out and makes it more memorable. The layout of the résumé directs your eye from the name down the left column and then over to the right. It is modern, but in a subtle way that is always suitable." - Claire
Why we like it: Claire's design forces the inclusion of only the most relevant information. In this "less is more" approach, we were drawn to her distillation of information, rather than a graphic verbal-visual barrage of information.

About the design: "Minimal design with graphics to illustrate my design prowess and aid in readability." - Jeremy
Why we like it: The small circle with one of Jeremy's sketches was the first thing we noticed about Jeremy's résumé. In this super-clean design he aptly demonstrates both his digital and hand-drawing graphic skills.

About the design: "This was the résumé I used straight out of university - I thought I was being a bit cheeky and clever - luckily my boss (of 3 years now) also thought the same!" - Claire
Why we like it: Clever and cheeky indeed, there's also something inspiring to Claire's "blank drawing" résumé. She found an idea that made her résumé stand out and transmit her personality, which allowed her to connect with her future employer.

About the design: "Simple, website-inspired design with quality typography and value which differentiates lines. Clear and not overly stylized." - Evan
Why we like it: This is a more traditional version of the classic black and white résumé. We appreciate the subtitles of graphic design and easily legibility.

About the design: "The visual language inspired by social networks and today’s fastest media gives the reader a quick, understandable interpretation of the content without losing sight of its importance." - Rafael
Why we like it: An architect/designer who is aware of his/her context is an invaluable asset in the office. By cleverly using a visual language that we're all familiar with—and subverting and modifying it to communicate the key information related to hiring processes—Rafael's submission was not only fun, but smart.

About the design: For the first time I read this article, I found that in this submission you don't have to make a résumé/cv properly as usual. Just think differently and make it unique. So, I thought out of the box to make this résumé. Inspired by Ludwig Mies Van Der Rohe, who said that "Less is more," I decide to make it kind of simple but still extraordinary. The use black and white color is to give a vibe of simplicity, modernization, and sophistication. Then how to make it interesting and unique? The quote "Less is more" always inspired me. For now, I made this quote to be "Less is morse." What is morse? It iss a method of transmitting text information as a series of on-off tones, lights, or clicks that can be directly understood by a skilled listener or observer without special equipment. So at I wanted make "some game" for the readers. With morse code I want to make the readers to do some observing; just like any architect does. I choose square to describe a dot and dash for the morse written. And why squares? It's again inspired by Mies. Through his design, I found that the "square" is the form that Mies always used. For the final word, thank you to Mies who always gives me such inspiration for any situation, even for my résumé :)" - Hendri
Why we like it: Even though it breaks most of the aforementioned rules/tips, it was a lovely breath of fresh air to receive Hendri's submission. It came with the kind of explanation that made us immediately want to know about Hendri's approach to design briefs. The gamble of making a practically illegible CV paid off for Hendri because it was clever, light-hearted and intriguing. 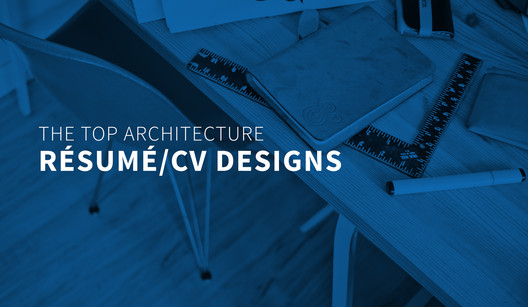