Save
ODA Designs D.C. Development With Views into Nationals Park
Share
Or
Copy

ODA New York has released plans for “West Half,” a mixed-use development for the Capitol Riverfront neighborhood of Washington, D.C., that will offer residents views into baseball games at the adjacent Nationals Park. The 11-story building will also feature two floors of retail space and community amenities as it becomes a new visual complement to the neighboring cultural landmark. 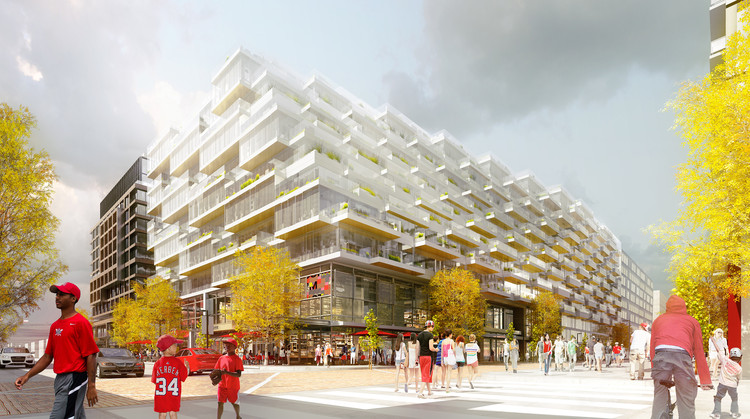 The 456,000 square foot building has been designed to prioritize the experience of the building “from the inside out,” according to Eran Chen, Founder and Executive Director of ODA New York. The form of the building slopes as it rises, allowing for a gradual transition from the streetscape, to public spaces to private apartments. The incline also provides room for a series of stepped terraces and balconies with views into the stadium – nearly 50% of the total units in the building will feature direct sightlines onto the field.

The building will also contain 61,000 square feet of retail space and public resources accessible to both residents and visitors to the stadium, allowing the building to become an extension of the entertainment district.

Residents will have access to a rooftop pool as well as a landscaped courtyard located at the center of the building’s U-shaped footprint, which also helps to provide ample natural light into each of the units. Interiors will feature contemporary, minimalistic details and tectonic finishes.