Radar Architecture&Art has won second place in the ACTIVATE North Carolina 2016 Housing Competition, which sought out innovative ways to reinvent urban housing for the 21st century.

Through its design, Radar proposes a “new way of inhabiting” and “a new sense of community” via a hybrid structure of public, semi-public and private space. 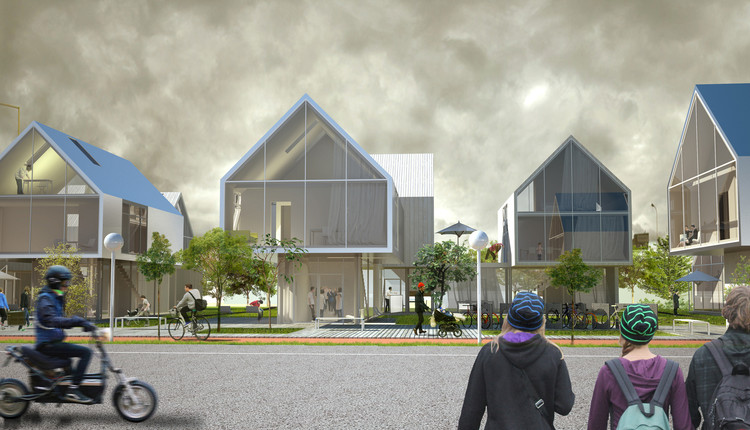 On the ground floor, the project features a maze of narrow, 3.7-meter-wide, translucent volumes, which host public and semi-public functions, as well as community living spaces of private houses. This creates a series of intimate and interconnected open spaces. These spaces additionally form an urban plaza, community plaza, commercial boulevard, playground, and garden area, in a mixture of typically urban and suburban spaces.

Above the maze, private residential volumes are placed, completing the “porous” fabric of the project.

The combination of living and working spaces located on one portion of the project contribute to the urban atmosphere of the proposal, creating a space where networking, cooperation, and synergy can flourish.

The urban aspect is further reinforced by the presence of facilities such as a restaurant/cafe, shops, community co-working spaces and children indoor spaces. The family dwellings on the other hand, provide typical aspects of the suburban life-style – closeness to nature with the possibility of barbequing, gardening, outdoor sports and relaxation, but in an environment that in a sense surpasses the limits of the suburbs being lively, community-like, with urban characteristics. - Radar Architecture&Art