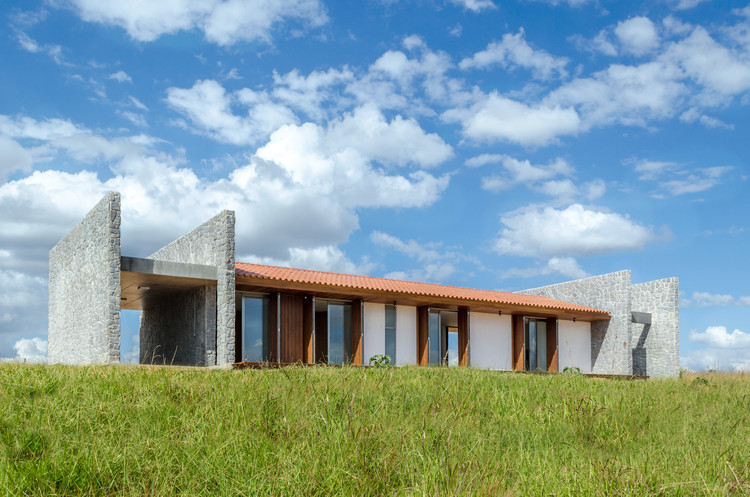 Text description provided by the architects. The house ER is situated 70km northwest of Brasília. It dates from 2008, at the time we were contacted to make a beautiful property in the country. The challenge that we accepted in a heartbeat. After eight years we received one unexpected news. We were informed that finally the house will be built. Obviously some modification were needed, but without prejudice to the original conception of the house. They actually contribute significantly to the design.

Placed in a strategic site, the house ER is situated in the highest place of the property and pointed for the contemplation of the valley that composes the unique landscape of the region. The design is simple. A pavilion of reduced spaces 250 m2 in total. The program is designed in linear shape that is accommodate between heavy stone walls, two bedrooms, one bathroom, living room/dining room, kitchen and open service area. This part of the program is under the ceramic roof witch configures the horizontal planes of the house in opposition to the vertical ones on the stone walls. The garage, under a concrete roof and the service area under a concrete pergola, they are located in the two extremities of the house and are self-contained by another two stone walls.

The openings established by the doors and windows follow the same principle based on a composition of planes, that give unit to the house. They were carefully placed so the viewers could grant a harmonic rhythm, characterized by the open and closed planes of the same size that define the façade and its austerity to the architectonic expression of the house. It’s worth to mention that the windows placed along the lengthwise of the house, placed in the same position but on opposite sides to ensure the constant ventilation and thermic comfort to the house interior. They have double packing. The first in glass and aluminum frames, the second by the pantograph wood frames that make full-time ventilation possible and privacy when needed.  They open to the exuberant landscape and embraced by the wood deck that allow an extension of the house itself into an external balcony protected by the ceramic roof.

The materials were defined by the stone, wood, concrete and ceramic roof tiles. Rustic materials to give the house the perfect consonance to it site. “…A house in a country site, in the landscape of the cerrado.” 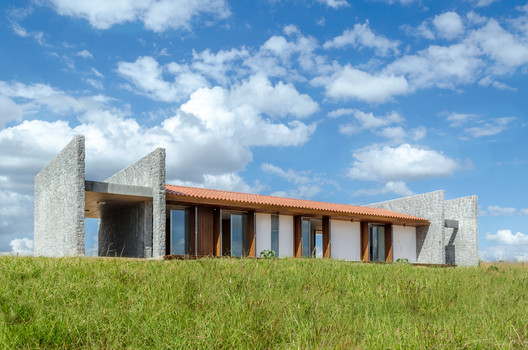