Save
Roberto Burle Marx: A Master of Much More than Just Modernist Landscape
Share
Or
Copy 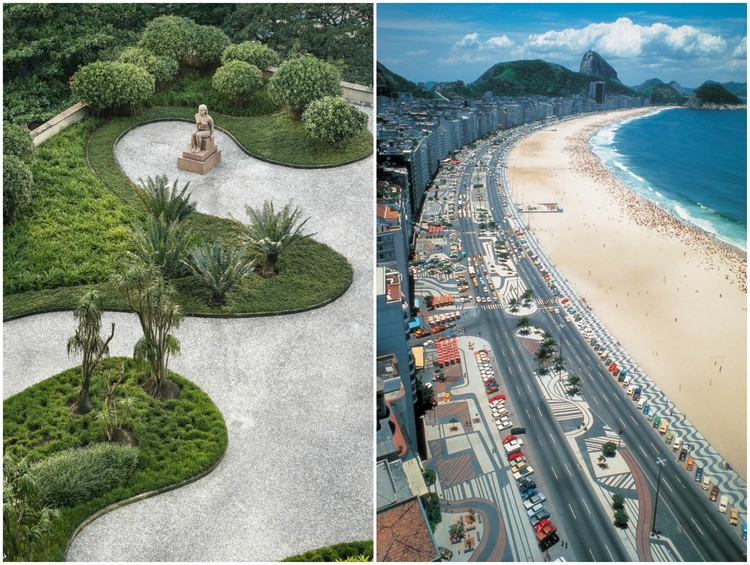 For almost half a century, Copacabana Beach’s vast sweeps of mosaics have animated the Rio waterfront. Plages, however, reveals little of its iconic setting. Only glimpses of the seductive lines slinking up and down the boardwalk are captured on film. Yet its ambient soundtrack adds much to this latest appraisal of Copacabana’s designer. Gonzalez-Foerster’s video is among the handful of works on display that are not authored by Burle Marx; these more contemporary additions stand in as interpretations of what the show recognizably cannot make present—the gardens and landscapes themselves. In an exhibition populated with figural and abstract paintings, bright, polychromatic plans, and sculptural maquettes, it is easy to lose sense of the material that Burle Marx, through hundreds of commissioned works, so effectively mastered: outdoor—and often public—space. The white noise of Plages restores some of the spatial dimension that escapes the graphics and models that often represent Burle Marx’s oeuvre.

A number of these exquisitely colored plans, animated sketches, and scale models have been paraded out into the museum’s first-floor galleries. Joining them there are dozens of Burle Marx-designed objects with no direct relation to landscapes or gardens. The largest is a tapestry for the Santo André Civic Center, a woolly mural of multicolored, multitextured shapes and marks that spans the width of the main room. The smallest: two gleaming teardrops of tourmaline, set into gold earrings. This eclectic range of objects has made the exhibition a somewhat unprecedented tribute. Specifically, it is the first show in the United States to examine the full scope of Burle Marx’s cultural contributions, from the sketches and canvases he made while painting in his 20s to the blown-glass sculptures he produced as an accomplished designer, working into his 80s.

Variety thus becomes one of the more obvious messages delivered through the objects gathered in the hall. In their effort to inspire a new wave of interest in Burle Marx, curators Jens Hoffmann and Claudia J. Nahson sought to portray their subject as much more than the peerless landscape architect revolutionizing Latin American design alongside clear-thinking innovators like Lúcio Costa and Oscar Niemeyer. As the title of the exhibition suggests, Burle Marx may be more fittingly considered a multifaceted “Modernist,” an individual whose readiness to apply himself to a variety of projects enabled him to imagine and truly embody the modern, whatever that may mean. A major claim of the show is that Burle Marx’s expanded artistic practice was essential rather than incidental to his innovations in landscape design.

As the introductory wall text acknowledges straightaway, Burle Marx remains a marginally familiar cultural figure outside of Brazil. Despite having left behind a portfolio bursting with projects—his most famed completed commission in the US being Miami’s vast, mosaic-embedded Biscayne Boulevard—and despite consistently appearing in the ever-expanding literature on Latin American Modernist architecture, Burle Marx has not yet attracted the kind of criticism and scrutiny of agenda (or ego) that usually accrues to midcentury figures of such influence. This latest exhibition therefore faces an interesting dilemma: Can an audience relatively unfamiliar with Burle Marx skip the circumscribed evaluation of his design practice and simply appreciate the plurality of his artistic pursuits?

The show contends that this is indeed possible and that a more expanded view of the man is a truer one. It guides visitors through the myriad disciplines and themes that were pulled into Burle Marx’s orbit: A preserved volume of a German gardening magazine signifies his early fascination with botany; hanging portraits of family members illustrate biographical details while also referring to a lifelong study of drawing and painting; tokens of his forays into designing theatrical sets, costumes, tapestries, and jewelry line the gallery walls and fill vitrines adjacent to vibrant drawings of parks and gardens. Together, these objects suggest an agile mind that moved freely between disciplines. They also prompt visitors to find similarities and differences within and across mediums, to observe changes in means of expression while developing a feel for some essential Burle Marxian quality intuited to connect this opulent cosmos.

Faced with such variety, it is tempting to fixate on superficial similarities among objects, to skate over details and search for a general trend. At first glance, Burle Marx’s career may appear to have climaxed in the middle decades of the century with the development of a bold, voluptuous abstraction that invoked contemporaneous directions in painting, anticipated the sinuous lines of Brazilian architecture à la Niemeyer, and culminated in some of his most celebrated garden designs, as it were. Along these lines, Burle Marx’s landscaping for the 1938 Ministry of Education and Health (MEH) building in Rio de Janeiro lends itself to representing a breakthrough for modern design. The gardens of the highly publicized project—an important early commission for the young painter-turned-landscape architect—neatly encapsulate the rejection of symmetry and the reconceptualizing of figure and ground, which have come to connote Modernism. The building’s rooftop garden, for instance, tells of how Burle Marx transformed the traditional promenade into a dynamic compositional element, a vaguely organic entity that both separates and connects amorphous islands of vegetation.

The gouache drawing of this rooftop garden is telling in many ways. With its interlocking, polychromatic globs, pristinely painted without the addition of text or other systems of notation, it is one of the most eye-catching pieces in the exhibition. (Visitors are greeted at the entrance with this showstopper, and it adorns a brochure directed at children.) Yet a nearby photograph of the project—one of the few photographs in the show—reveals that the vibrant hues of the two-dimensional design do not correspond with the coloration of the actual garden. While Burle Marx was widely recognized for his tendency to group flora into immense daubs of monochrome, presenting plants like the pigment of an oversize painting, the photograph depicts only varied shades of green in the garden’s medley of grasses and foliage, sharply contrasted against swaths of light-gray rubble.

Considering his initial training as a painter, along with the formative couple of years he spent sponging up the influence of Weimar-era visual artists in Berlin, one could reason that Burle Marx applied modern, painterly abstraction to external disciplines like garden design and, in so doing, heralded the arrival of Modernist landscape architecture. Yet the gouache drawing of the MEH rooftop, which is described in its object label as “both a garden plan and an abstract painting,” suggests a more nuanced narrative. In leaving obvious discrepancies between the garden and its graphic representation, Burle Marx seemed to acknowledge that the interplay of hues and forms that animates a painting is precisely not the same elemental interplay that animates a landscape—or a work of any other medium. The challenge of modern landscape architects is twofold at the very least: They must grasp not only the geographical specificities of each site but also the material specificities of each art form used to imagine and represent these sites.

This may be the deeper subtext of the exhibition and its emphasis on the heterogeneity of Burle Marx’s pursuits: Rather than reflect a compulsion to use other arts to reinforce developments in Western painting, Burle Marx’s oeuvre seems to support a broad investigation of materiality, a lifelong search for the terms unique to each medium with which he engaged. He scaled his compositional approach with remarkable dexterity. His aesthetic sensibility applied to magazine covers as well as rooftop gardens, precious items of jewelry as well as bold public sculptures. The viewer, however, must take care to study the materials and contexts that distinguish them.

This sensitivity to material is what propelled Burle Marx’s career as a landscape architect. It can be recognized in his use of native flora in his garden designs: Burle Marx labored to identify and cultivate Brazil’s understudied tropical undergrowth (he discovered nearly 50 species), framing indigenous plants in arrangements that gave them new significance. His regard for an expanded view of nature—and not just its most historically prized specimens—fed into his pioneering advocacy for ecological preservation. At the same time, Burle Marx freely used nonorganic and manmade elements, transforming sites with concrete sculptures, ceramic tiles, and immense beds of colored minerals, as in the rooftop garden of the Banco Safra headquarters in São Paulo. In these gestures, he made clear that the materials of garden-making had changed: Modern man built miniature Edens atop skyscrapers, paved roadways next to sublime coastlines, slashed and burned forests in the name of progress. A modern garden, in turn, could not ignore these aspects of its zeitgeist. It absorbed them—“cannibalized” them, to use the term of the Brazilian poet and incidental theorist of Brazilian Modernism Oswald de Andrade—and consequently produced something provocative and new.

Similarly, the exhibition acknowledges the conditions of its site, so to speak. The curators concede the difficulties of communicating the experience of space, that ephemeral medium composed of so many facts and conditions that inherently exist elsewhere. Given their sprawling scale and organic instability, landscapes and gardens are particularly resistant to established means of representation. Rather than present an excessive supply of photographs to aid in the imagination of Burle Marx’s landscapes, the show enlists seven contemporary artists to interpret the man’s legacy. These contributions, which include ceramic pieces inspired by Burle Marx’s work with tiles, paintings of books published about the landscape architect, and a few large-scale photographic prints of his gardens, mostly fall flat amid the dazzling array of Burle Marx–designed objects. Plages may be the standout piece that adds to the ecology of the exhibition. The collective chatter of a people and their place, held together in a liminal moment, inspires a wonder and excitement that might come close to what Burle Marx felt in his own time.