With the contract to design and build the museum in Perth officially awarded to contractor Brookfield Multiplex, HASSELL + OMA have revealed the design for the New Museum for Western Australia. The WA Government commissioned HASSEL + OMA to design the cultural institution in April of this year.

HASSELL Principal and Board Director Mark Loughnan, and OMA Managing Partner-Architect David Gianotten stated: “Our vision for the design was to create spaces that promote engagement and collaboration, responding to the needs of the Museum and the community. We want it to create a civic place for everyone, an interesting mix of heritage and contemporary architecture, that helps revitalize the Perth Cultural Centre while celebrating the culture of Western Australia on the world stage. The design is based on the intersection of a horizontal and vertical loop creating large possibilities of curatorial strategies for both temporary and fixed exhibitions.”

The images of the project reveal ample public space and an impressive combination of new structures and existing heritage buildings. The designers explain that the driving concept of the scheme is "a public space that is the central point of the new museum, in terms of both location and programming." This "outdoor room" seeks to increase public presence in the area, especially when the museum is not officially open.

The New Museum is due to be completed in 2020, with main construction beginning next year. 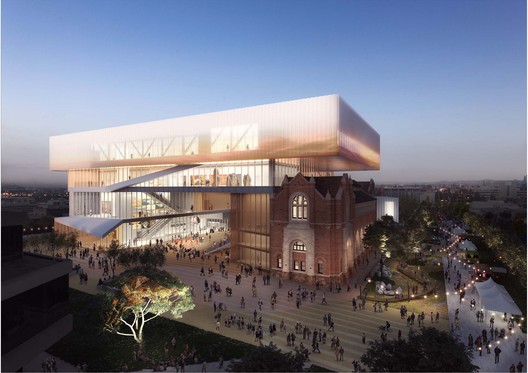