Far from the common dismissal of Margot Krasojevic’s work as (in her own words) “parametric futurist crap,” her work has always revolved around concepts of sustainability. As she explained to ArchDaily last year, she aims to focus on the ways that sustainable technology “will affect not just an architectural language but create a cross disciplinary dialogue and superimpose a typology in light of the ever-evolving technological era.” For the second project in a series of three proposals for the city of Belgrade Serbia, the architect is proposing a “Trolleybus Garden” that functions as a waiting shelter and park while simultaneously harnessing kinetic movement to produce electricity. 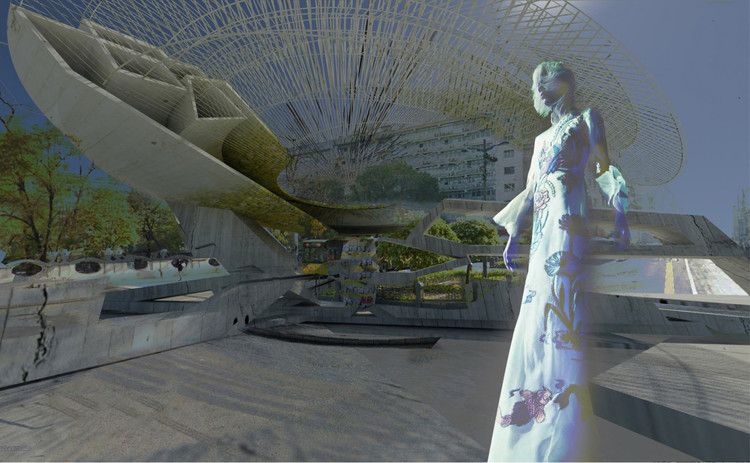 Contrary to the immediate speculation of many, Krasojevic’s projects are not just media-friendly photo-based assemblages. They are founded on more tangible research, data, and inspiration. For this proposal, the architect looked at the city’s pre-existing trolleybus network. In lieu of bus transport, trolleybuses are electric vehicles which make them more environmentally friendly than fuel-burning vehicles. Her idea sprung from the way in which trolleybuses were powered: the vehicles use spring loaded poles to draw power from overhead wires. The poles work like a “current collector” which transfer the energy from the overhead wire to the vehicle’s controls and electric traction motors. Krasojevic envisions her Trolleybus Garden to work like a current collector at a much larger scale.

Just like her earlier playground proposal, the key technology behind the Trolleybus Garden is printed Piezoelectric cells, and the structure is connected to the trolleybus network’s overall infrastructure and overhead cables. Piezoelectric materials generate mechanical energy when subjected to mechanical strain—movement. From the movement of the trolleybuses through the stations, falling rain, random pulses and even passing wind, vibrational energy is harvested from the overhead cables and collected within the stations.

The station’s design also deliberately causes more vibrations to occur in the structure, which means that any mechanical input is amplified. This expands the electrical output of the structure to provide street lighting and Internet WiFi in the immediate area, a power port for charging commuters’ mobile devices and smart cars, and power for the irrigation sprinklers in the park next to the terminal.

In some ways this proposal’s overall parti is undoubtedly simple and well-articulated enough to be understood—not to mention that the project’s proposed functions would be a welcome addition to any city center. This puts an end to the common argument that Krasojevic’s work is nothing but convoluted and meaningless computer-generated forms. However, the proposal’s supporting images do the exact opposite, and this project is bound to incite irritation because it presents an outrageously altered image of everyday life in the heart of the city.

This presumed irritation, however, says more about our current predisposition to over-simplify. While new technologies are excitedly welcomed and integrated into our daily lives, we are less open to accept the implication proposed by Krasojevic: that “distractions encouraged by technology affect the way we understand our context.” This project's visual representation is to be understood as a continuing research on relating the overwhelming information that we are exposed to in our daily lives. The work of Margot Krasojevic portrays the narrative of an architect trying to visually negotiate concepts, components, perceptions, and visions beyond architecture but doing so with the tool of the architect (the image). Architecture has always been about painting a well-crafted image, and it is precisely Krasojevic’s dizzying visual representation which confirms that she is an architect building architecture.