Founded by philanthropists and artists Cathy and Peter Halstead and inaugurated in June 2016, Tippet Rise began as—and largely remains—a working ranch. It sprawls across 11,500 acres of rolling hills and alluvial mesas of southwestern. To the west rise the snowy heights of the Bear Tooth Mountains. Off to the east, hills give way to golden prairies that stretch out to the horizon.

Into this privileged landscape, the Halsteads and team have strategically inserted massive outdoor sculptures by Alexander Calder, Mark di Suvero, Stephen Talasnik, plus three specially commissioned works by the Spanish architectural firm Ensamble Studio. And hidden in a small depression near the entrance of the massive ranch, the LEED Platinum-certified Olivier Barn serves as both base camp for visitors and a state-of-the-art concert hall. 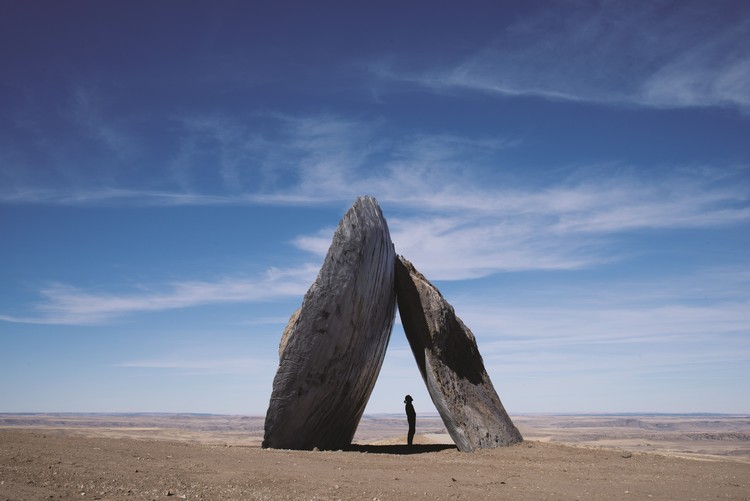 Resonance of the Land

From carbon footprint to visual impact, one key principle informs the design of the built environment: intrude as little as possible on the natural environment, while intensifying visitors' connection to it.

Tippet Rise occupies a landscape that, as you move through it, is in a constant state of flux. The infinity of the plains to the east appear and disappear as you move over a rise in the land. From most vantage points, the snowcapped Bear Tooth Mountains remain a pretty but unimposing line of white and blue at the horizon. But as you near the top of a hill, they can soar suddenly and sublimely. When you head down into one of the gold-green folds in the land, they disappear altogether.

"We had looked at so many places, but the first time I drove into Tippet Rise and saw the landscape unfold, I knew instantly this was the place," says Cathy Halstead.

To minimize impact, buildings are warmed and cooled entirely by geothermal systems and lit by solar power. Rolling hills keep parking lots hidden until you are practically upon them. The modestly sited Oliver Barn looks at first glance just like that: a barn. And from the barn's terrace, Inverted Portal, a specially commissioned work by Ensamble Studio, appears to be a pair of boulders deposited by some ancient glacier on a distant hilltop.

Even while treading lightly, the artists, architects and designers of Tippet Rise deliberately play with the land's seemingly endless variability. Like the high peaks and distant plains, the buildings and sculpture—and even the roads that join them—appear and disappear and reappear as you move across the corrugated land. As a result, the built environment reveals itself to the eye very much the way, over the course of a single piece of music, a composer introduces, deconstructs, and reprises a musical theme.

The Acoustics of Intimacy

Just as sculpture and architecture are designed to provoke surprisingly intimate connections with a vast terrain, the simplicity and small scale of the Olivier Barn's music hall is designed to enfold listeners in the vastness of the musical encounter.

"When you first enter the building, you are immediately surrounded by the warmth and beauty that come from a wood barn," says architect Laura Viklund.

Bassuet explains that the hall's dimensions are inspired by intimate and enveloping spaces like the room in Esterházy Palace where Joseph Haydn composed and performed chamber music. England's Snape Maltings Concert Hall, a favorite of the Halsteads, was also a key model. Like Snape Malting, the Olivier Barn is constructed with a pitched ceiling and sound-diffusing timber framing that give the sense not that the music is being projecting from the stage, but that the audience is literally sitting inside the music.

“Because smaller halls are shorter than a great hall (typically double their size), they allow for stronger and shorter reflections from the rear which reinforce the sensation of envelopment," explains Bassuet. " With fewer seats, they can have a long reverberation, and overall their acoustics are intimate, clear, reverberant, loud, enveloping, and rich.”

However, for Bassuet the listening experience extends beyond the science of acoustics to encompass the totality of the listener's sense impressions. That is why, for instance, he and his team opted for limited palette of warm-toned natural materials. They actually make the music 'sound' more beautiful in our minds, says Bassuet.

To add another dimension to that pleasure, the design team also placed a large, west-facing picture window behind the performance area. The window frames a rising set of grassy hills that end in dark blue peaks and, above them, an azure strip of sky. As the music unfolds, winds ruffle the silent grasses, shadows on the distant mountains shift gradually, and cows grazing on the hillsides down into the scene with pastoral slowness.

"During a performance, time and space, the rhythms of land and music and built environment, all merge into single, extraordinary experience," says Sarah Bird, Tippet Rise's creative director.

Between Architecture and Landscape

A 15-minute drive from Olivier Barn, a strange structure suddenly appears around a bend in the road. Called Domo, it is a massive work by Spain's Ensamble Studio. But what is it exactly? A strange extrusion of the land itself? Ruins of some sort? The site of ancient rituals?

In fact, it is a structure that tests the limits between landscape and sculpture, sculpture and architecture.

"In looking at what has shaped our approach to land, music, and art on the geologic upthrust plateau of Tippet Rise, Cathy and I realized that the land was too vast, too timeless, for conventional structures or art forms," writes Peter Halstead.

Literally, Domo is formed from the landscape. It is largely constructed from earth extracted from Tippet Rise, then shaped to echo its geomorphic forms. Ensamble's Antón García-Abril and Débora Mesa describe Domo and their other two works at Tippet Rise—Beartooth Portal and Inverted Portal—as "structures of landscape that are born from it and give it order, transforming energy into inhabitable space."

As you move around and through Domo's constantly changing forms, you discover definitive signs of a human hand, including the polished surface and a cantilevered overhang. The overhang looks at first like a natural formation, but on second thought it seems to defy physics—another sign that you are encountering art rather than nature.

However, the overhang is also a complex piece of design that turns the massive sculpture into a work of architecture: that is, a very unusual band shell. The overhang protects performers from the elements. It is also engineered to project music with impressive range and strength across the surrounding land.

Lopping off the Fancy

It all sounds like the kind of rarefied place that a lucky few access by private airstrip. The reality is quite the opposite. The weekend I attended, a majority of the guests hailed from the surrounding ranchlands. In the words of Sarah Bird, the Halsteads were very clear they wanted to "lop off the fancy" that too often stands in the way of high art and the public.

The gated entrance of Tippet Rise looks like that of any other ranch in the area, except perhaps for the subtly minimalist font of the signage. The main music hall is not decked out with eye-catching fins, swoops or glittering metallic skin. And the pricing is also anything but highfalutin. Concert tickets cost US$10. And for another US$10, visitors can load up at the buffet-style barbecue and join their fellows at communal picnic tables.

In other words, an evening at Tippet Rise costs about the same as a movie and dinner at McDonalds. Except that the Tippet Rise menu includes brisket in a sauce of local huckleberries, ribs infused with cherry marinade, a superior pinot noir and, on one of the evenings I attended, every single one of Chopin's études played in order and at a single go—a feat of mindboggling complexity.

This season's performances are already sold out, but it is possible to tour the land and visit the sculptures Friday-Sunday 10am-6pm. Visitor numbers are limited. Make reservations at tippetrise.org.

Find out more about Ensamble Studios' structures at Tippet Rise - including how they were constructed - here. 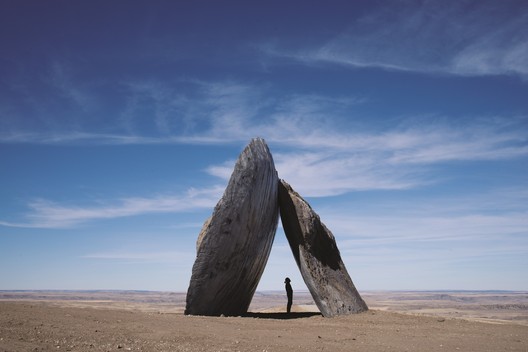