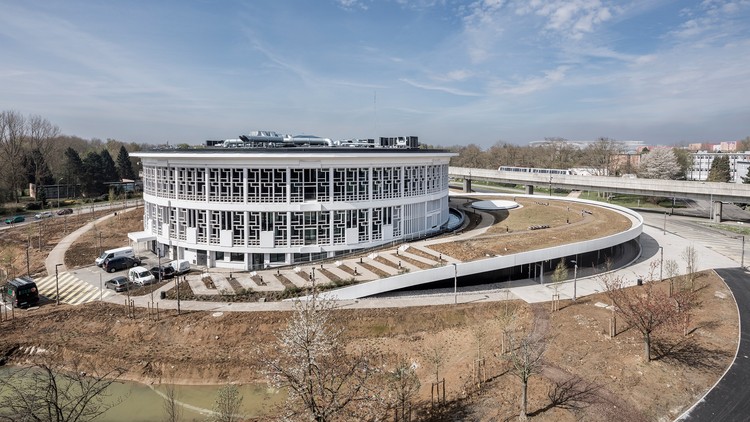 Text description provided by the architects. Forward-thinking education requires contemporary concepts, including renovation of university infrastructure, which the French ministry of education has provided extensive funding to expand. An important goal of these reforms is to rethink outdated learning concepts. Technical progress, as well as new methods of communication between teaching institutes (students and teaching bodies) and the public, begin to question the traditional form of scientific libraries. The new Learning Centre “Innovation” is part of a series of similar institutes tasked with stepping up to the new challenges and preparing for the future.

During the mid-60's, the architect and Le Corbusier-student Noël Le Maresquier designed the central, identity-defining volume of the new university campus: a circular library building. As a refuge for research and learning, the library aged not only structurally. The existing building and its iconography were to be kept, and spatially extended and reinterpreted in its urban landscape with new contents. A new events area, cafeteria and experimentarium, the “Xperium” – a place where current research results are presented to the public – were therefore added to the existing use of the building as a university library. These changes redefined the classical library as a modern “Learning Centre”.

This raised the question of how to deal with the perfect circular form of the existing building and its defining facade, which was to be kept. Our competition design chose to forego a typical extension building, favouring instead the expression of a landscaped solution: A tall landscaped element surrounds the volume, creating a new main entrance and integrating the new spaces into the concept.

The new landscaped base defines a clear spatial edge to the western square, becoming the threshold between Learning Centre and the neighbouring cultural centre. The square becomes a new space for communication between students, harbouring life on the campus. The organisation of the accesses and new functions beneath the plateau are legible as “old” and “new”: a light-well gap offsets the landscaped base from the existing cylindrical volume and uses the strip of light as the threshold between the old and new bodies. A large hall from the entrance level to the upper floor connects both. The existing façade is neither broken nor disfigured. The form of the existing building – the geometry of the circle – serves as a design element between old and new. The circular form is repeated, scaled and offset to each other. This defines new spaces with various functions, architectural qualities, depths and illumination.

The division of interior spaces follows the composition between existing building and the new landscaped plateau. While the generous reading areas and book stores are organised in the existing building, the functions such as the events area and Xperium, loaded with new technology, are publically positioned in the base.

The university presents itself as a modern institution, able to connect innovation with tradition. The Learning Centre offers many different learning environments. Boundaries dissipate in the digital age; the classical library is obsolete; digital media and interaction are gaining significance and cause the dissolution of the spatial boundaries in the learning areas. The building sketches a landscape of knowledge, surrounding a central hall as a communicative area. Various learning institutions flow into each other and create spaces with multifunctional uses, providing the users with spaces to be used flexibly. Working with the inner facade of the circular building allows an extension of the library to the exterior space. 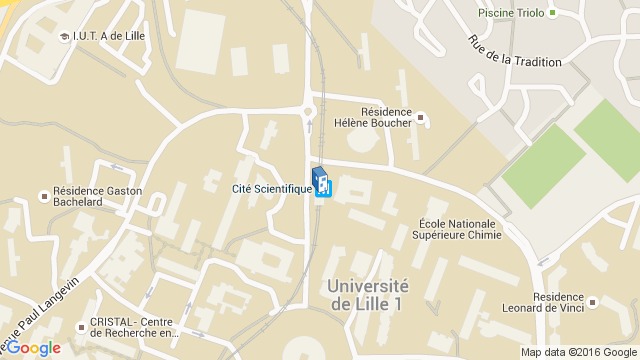 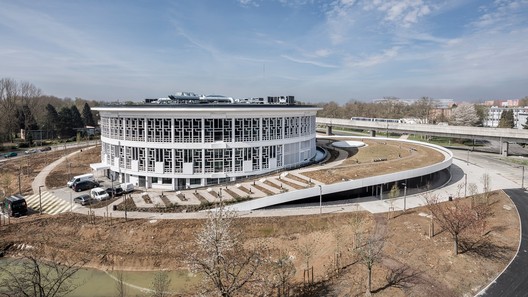