Save
A Tiny Luxury: What are “Tiny Houses” Really Saying About Architecture?
Share
Or
Copy

Following a successful pilot launch in Boston and $1 million in venture backing, a startup company called Getaway has recently launched their service to New Yorkers. The company allows customers to rent out a collection of designer “tiny houses” placed in secluded rural settings north of the city; beginning at $99 per night, the service is hoping to offer respite for overstimulated city folk seeking to unplug and “find themselves.” The company was founded by business student Jon Staff and law student Pete Davis, both from Harvard University, out of discussions with other students about the issues with housing and the need for new ideas to house a new generation. From that came the idea of introducing the experience of Tiny House living to urbanites through weekend rentals.

Inspired by the notion of micro-housing and the powerful rhetoric of the Tiny House movement, initiatives like Getaway are part of a slew of architectural proposals that have emerged in recent years. Downsizing has been cited by its adopters as both a solution to the unaffordability of housing and a source of freedom from the insidious capitalist enslavement of “accumulating stuff.” Highly developed and urbanized cities such as New York seem to be leading the way for downsizing: just last year, Carmel Place, a special micro-housing project designed by nARCHITECTS, was finally completed in Manhattan to provide studio apartments much smaller than the city’s current minimum regulation of 400 square feet (37 square meters). Many, including Jesse Connuck, fail to see how micro-housing can be a solution to urban inequality, yet if we are to judge from the early success of startups like Getaway, micro-architecture holds widespread public appeal. Isn’t user satisfaction the ultimate goal of architecture? In that case, it’s important to investigate the ingenuity behind these undersized yet often overpriced spaces. 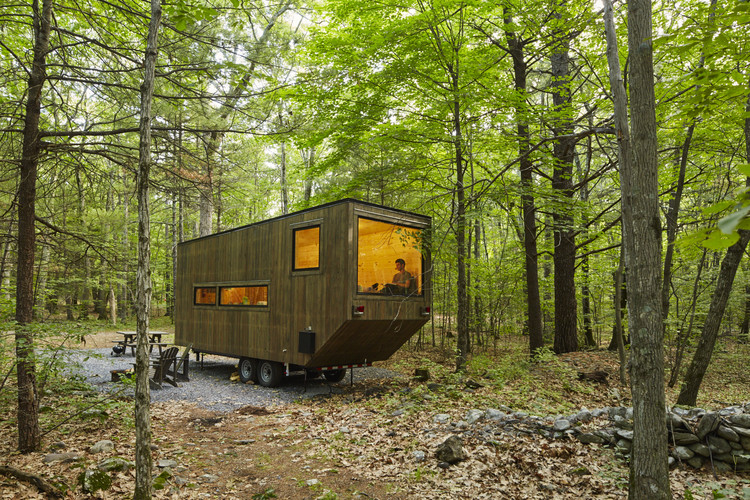 The designs of the Getaway cabins are certainly attractive. With straight lines, contemporary minimalist touches and warm wood accents, it is not difficult to understand why they would appeal to urbanites. Designed by current students and recent graduates from Harvard GSD, the cabins are built with big windows and integrated furniture. They are also serviced with running water and other plumbing as well as solar power. The idea of an overnight stay seems like a fun experience and a casual novelty without too many risks. However, it is difficult to conceive these “cabins in the woods” as ground-breaking architectural innovations.

Instead, Getaway is a very smart business move which capitalizes on the needs and emotional impulse of a generation. This is Getaway’s value to the architectural community, as it allows us to understand the desires of the upcoming generation in regards to living spaces and environments. In an introductory video to the Getaway concept, the company’s CEO John Staff opens with a strong and relatable message: “The housing we have doesn’t work very well for the millennial generation; the form is wrong, the function is wrong, the social aspect is wrong, [and] the geography is wrong.” Yet for the rest of the video, the details of what exactly is wrong with these aspects of housing remains undisclosed. It is difficult to accept a “Tiny House” as the solution when the problem is unknown. There is every reason to be unhappy and dissatisfied with one’s lifestyle—to be stressed, overworked, overstimulated, in debt, and burnt out. This is the truism which has been spun around by Getaway to fit the narrative of the Tiny House Movement as the magic pill. However, to charge a pretty penny for this “solution” goes directly against the movement’s anti-capitalist principles.

Positioning Tiny House Living as a luxury service is a fetishization of the movement’s more humble origins. While this certainly encourages a larger demographic towards living a more “holistic” lifestyle, the misrepresentation can lead to more problematic outcomes. The glamorization of Tiny House Living can lead others to forget about its downsides. Like any lifestyle, there is required maintenance which may not be enjoyable. The simple check-in and check-out system of Getaway does not educate the guest as part of its “experience”: the details of towing costs, finding suitable land, hooking up to plumbing, and waste management are brushed under the rug. The glamorization might also enable a kind of “gentrification” (albeit one dissociated from the localized nature usually seen in gentrification) to occur within the Tiny House movement. The cost-effective nature of Tiny House living is a radical alternative for the economically strapped and those displaced by rising housing costs. But the kind of media publicity that Getaway creates for the Tiny House Movement could once again displace the people most in need as they are outcompeted by young thrill-seekers just seeking to live a more “authentic life.”

The success of Getaway’s service reflects the changing attitudes about privilege, wealth and materialism in the 21st century. Nowadays, it seems that the most common way to articulate one’s privilege is precisely to reject it—or rather to reject the traditional view of privilege for other worldly pursuits. Toronto Life Magazine paints a vivid (though undeniably exaggerated) portrait of how millennials are trying to live their lives. Unlike the previous generation, the millennial’s dream is to collect experiences: travel the world, spend time with friends, drink good wine and eat good food. To realize these dreams, many millennials are not naïve, as the previous generation would like to call them.

As the Toronto Life article above puts it, this is the generation that is unhappy with the affluence afforded to them and is seeking a different experience, but nonetheless an experience of affluence; to chase their desired lifestyles, millennials are prepared to sacrifice. In the article, the 30 year old pharmacist chooses to live rent-free by staying in his childhood bedroom at his parents’ house, but in return he gets to travel the world and blow his income on extravagant night outs. For others (with less forgiving parents), this sacrifice could be in the form of living small in a tiny home. When millennials are caught living in seemingly precarious living conditions, in some instances these are deliberate choices in order to prioritize what they believe is more important in living an authentic life. This is the perspective that Getaway hopes to appeal to. As Staff describes, their service is “an opportunity for people to find out what’s really important and what makes them happy” which, he says, “has a lot more to do with how you spend your time and a lot less to do with the stuff you own.” This is marketing done right by a Harvard business student.

An Architecture of Authentic Deliberate Experience

Architecturally speaking, it is the tailor-made quality of the houses which contributes to Getaway’s success. When space is limited, the design of this space becomes more focused around human use just to make the structure habitable at all. However, this deliberate-ness certainly strikes a chord with a target market seeking to live true to their own purposes and desires. Staff comments that “tiny isn’t really that tiny when you’re in a small high-quality space [because] you can focus on living your life and connecting with the people you care about,” and we need to focus on the latter part of that statement. The public is yearning for higher quality, and one way to approach that is through deliberate-ness: creating a space which is optimized and not augmented. As Getaway’s different designs show us, it also isn’t about providing everything but rather prioritizing a set of desires. Getaway’s Lorraine House is designed for group excursions; the Ovida is meant to be a writer’s retreat and the Clara is designed for doing nothing at all.

There are two distinct aspects of Tiny House living which must be understood separately: the physical and the experiential. Not only does each aspect appeal to different groups, but they also lead to different outcomes. The physical sense of “smallness” in tiny houses is what makes the option cost-effective. This is particularly attractive to those at the lower end of the economic spectrum. However, this is the same aspect which is problematized by critics, who fear that the diminutive sizes could lead to lowering the standards of living in our cities. Then, there is the experiential aspect of “smallness” which endears a completely different demographic to the lifestyle: the young, educated and mobile middle-class. Tiny Houses appeal to this demographic’s predominant view on “living globally” in a social, political, and environmental sense.

Conventional architecture needs to tap into the experiential aspect of tiny houses much more than the physical. Dissociating one from the other could prevent the fetishization and resulting gentrification of the tiny house movement, while at the same time sharing the virtues found in tiny living with a larger population. So how can we emulate the experiential aspects of tiny houses without requiring physical smallness? Here are a few suggestions:

All of these are elements of architecture that have already been explored and developed—and yet they are increasingly lacking in today’s conventional architecture: the “normal” and “non-designer” spaces that 90% of the urban population lives in.

It is important to understand that a tiny house is not a good space because it is small, but rather most tiny houses are good space that just so happen to be small. Somehow, it seems that the physical lack of space is what allows us to re-focus our intentions on creating well-designed high-quality space. After all, the very idea of a “good space” continues to be debated centuries after architecture began recognizing the notion of space itself, meaning to say that we have yet to fully grasp its potential. Tiny architecture seems to be a tool for us to unconsciously make the “fluke” of producing high-quality spaces repeatable. The lesson to take home is not that we should all move to tiny houses, but that we should take after the “deliberate” nature of small spaces and try to emulate this quality in more conventional built form.

Radical and reactionary phenomena like the Tiny House Movement deserve consideration as they reflect on our larger practices and attitudes which go unnoticed and unquestioned. Worries such as unsustainable housing costs are legitimate, and initiatives such as Getaway are not entirely misguided. For example, John Staff also asks: “How can we convert our housing stock into something that is more usable for this generation and that’s responsible for the environment?” They are certainly asking the right questions, for which solutions need to be developed by encouraging continued discussion. Concepts such as Getaway are to be given credit for deepening this conversation—whether that is the inner conversation in the minds of its would-be guests, or the larger conversation within the architectural community.