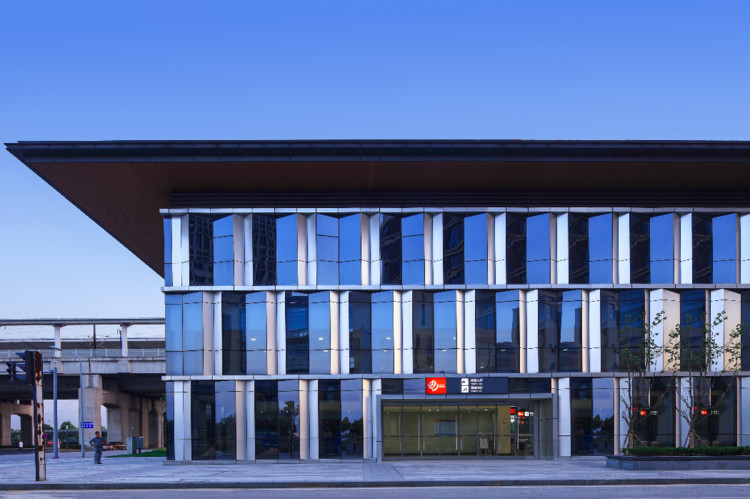 Text description provided by the architects. Huishan Transportation Center and the earlier built high-speed railway station become the new center of Huishan District, which play a significant role in the overall cityscape. The project is in a moderate scale with about 7000m² floor area. Besides serving as bus terminal, the transportation center is also the power station as well as an administration office for the railway station.

As an urban focal point in the new district, the transportation center shall be unique and identifiable, in the meantime it should have a dialog with the curvy shell railway station in a humble way. Based on the concern, a rippling box with facade like water waving is created. Together with railway station, the new transportation center define a modern, light architectural style for the new district of Huishan.

The roof of the building is folded and extended to the south and west elevations in order to have contrast to the curvy shell of railway station, meanwhile some overhang and inclination is formed. The folding plate provides a feeling of lightness and forms an enclosure to keep the building away from the railway noise. The overhang part of the roof and wall is supported by steel structure, and it is integrated with curtain wall keel and ceiling, in order to improve the lightness and thinness of the volume.

On the elevation facing the city, the designer created a vivid three dimensional facade consists of folding glass and aluminum plates, and each floor is interlaced, which brings a dynamic image to the city. The aluminum plate surface is anodized with blurred mirror finish to provide a hazy visual effect. When passing by the transportation center, the glass plate would reflect the actual surroundings while the aluminum plate will only reflect the obscure atmosphere nearby. The overall elevation presents a fabrication of reality and illusion, a fluidity of ambiguousness.

The facade consists different combination of solid and transparency, so that sunlight could have various projections in indoor space and meet different lighting requirements in different areas like terminal lobby and office.

On the elevation facing to the railway, the facade is heavier and simpler than the opposite side, which mainly consists of gray marble. The vertical linear windows make the facade have a unified look, and the opening proportion is determined through careful calculation to meet lighting needs and to minimize the railway noise.

The building plan has a simple and clear layout. The bus terminal is in the east of the building, where is closer to the pedestrian flow coming from the railway station. The office portion is in the west and upper levels, in order to reduce the interference of the passenger. The power station is located in the basement to reduce the structural load and cost, meanwhile it could minimize the influence of equipment vibration. The power station vent port is in the southwest corner away from the bus terminal. The cooling towers sit on the roof with a dedicated noise reduction design.

The building material mainly consists of blue gray glass, silver anodized aluminum plate, light gray stone with some black corrugated aluminum interspersed on the roof and parapet edge. The combination of glass, metal and stone reflects the boldness and sharpness of modern architecture. Meanwhile the wooden color aluminum plate on the roof and inner wall brings warmness to the building. The project reflects and develops our persistent consideration and exploration in regional architecture practice.

Compared with creating a dazzling building, designing a simple, elegant, modestbut impressive project is more challenging. We believe the program will beoutstanding by its role and function in the city. More importantly, it will be extraordinary because of the respect to the environment as well as the control of materials, proportion and scale. 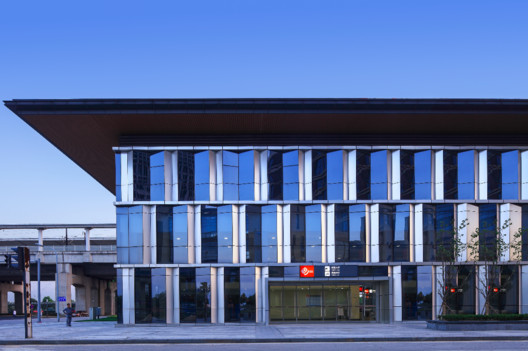