With its overblown rental market and the rising costs of tertiary education, London is turning from a city that welcomed creative individuals to one that locks them out. Boano Prišmontas believe that "creativity should not be linked to social status," and the way to counter this is through the creation of affordable spaces. As a response, they have created the "Minima Moralia"; a compact, modular steel frame assembly with infinite possibilities for customization.

Boano and Prišmontas envision the Minima Moralia as a type of "urban acupuncture" which infills misused open spaces with active and well-designed structures. In doing so, it bridges the gap between private and public spaces and furthers the investigation into live/work typologies. The designers are interested in how these spaces might pop up in clusters, forming new creative communities throughout London.

Several Minima Moralia prototypes were constructed and displayed throughout the London Festival of Architecture, each occupied by a different field of creativity. An architect, a carpenter, and fashion designer all used the space differently, with the tight confines allowing them to bring only what was absolutely necessary to their craft.

Whilst this acted to show the different ways in which the cellular pop-ups could be staged, it also gave visitors a window into the different workspaces, which Boano and Prišmontas believed would give the chance to reveal "the secrets of their craft."

These 'revelations' occur through a series of openings such as a movable canopy, a movable window, and a fixed skylight. The folded openings lift to reveal the internal space, allowing visitors to "take a peek," whereas the skylight provides illumination during the day and a portal to the stars above at night.

The Minima Moralia pop-ups were displayed at Dalston Roof Park in London throughout June, acting as event spaces to support the local community of artists. For more pictures of the installation, check out the gallery below.

For more information, check out the Minima Moralia Website and the London Festival of Architecture Program. 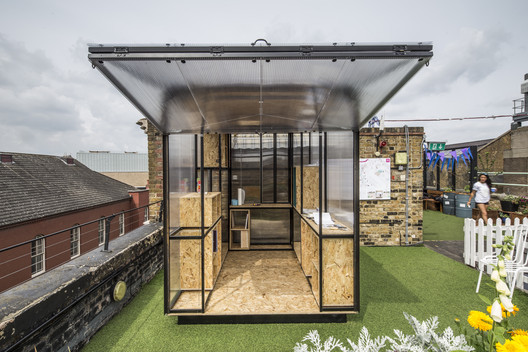