After receiving building permit approval, Twelve Architects has revealed their design for a 42,000 square meter international exhibition center in Yekaterinburg, Russia. The design, which houses a series of conference halls, a media center, gallery, exhibition space, seminar rooms and lounges, has been developed from their initial 2015 competition winning entry. Partnership with a local practice has helped to guide the design of the center, enabling the creation of a major cultural hub within Yekaterinburg.

Included within Twelve Architects' £400 million masterplan does not only include the new cultural center but a new 300 room hotel and banqueting complex, all linking to existing exhibition halls and public spaces. The congress hall is the epicenter of the design, with a series of engaged, organically shaped volumes stacked and twisted forming the main area of the building. The architects explained in a press release that "the congress hall’s interlocking forms represent people coming together from around the world to meet and share experiences." The main 4,000 seat auditorium is located at the heart of the building and is designed to facilitate a wide breadth of cultural and professional events.

Their 2015 winning design in the competition has undergone revisions to comply with the Russian SNIP building regulations. Many design decisions came from compliance necessities, including the standardization of the facade panels to meet fire codes. For this, the modular system of the steel rain screen alternates between 300mm wide silver and 150mm wide black panels, arranged into 3m panel 'zones' offsetting in elevation to accommodate the facade curvature. 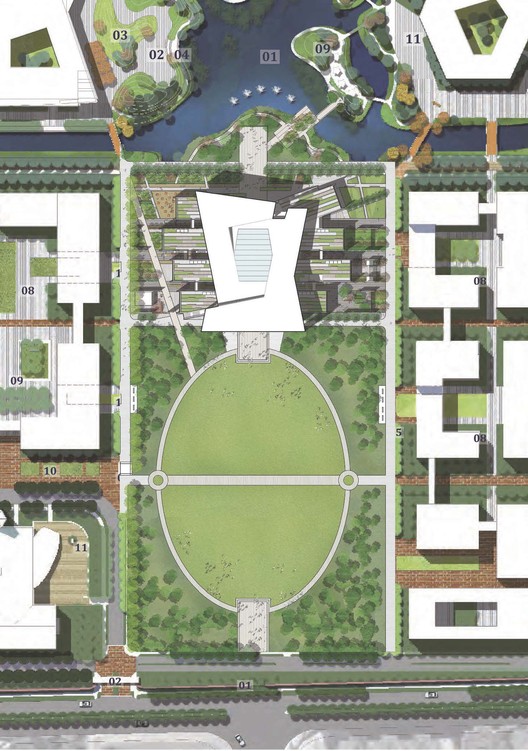