Save
Material Focus: The Great Wall of WA by Luigi Rosselli
Share
Or
Copy

The Great Wall of WA, designed by the Australian firm Luigi Rosselli Architects, and selected as one of Archdaily’s Best Building of the Year 2016, provides a unique example of rammed earth construction. At 230 meters in length, the Great Wall of WA is the longest structure of its kind in Australia and possibly the South Hemisphere, according to its architects. Built in remote North Western Australia, the building is made from locally available materials whose thermal properties help it to endure a variable climate. We spoke with the architect Luigi Rosselli to learn more about his compelling choice of material and the determining role it played in his concept design. 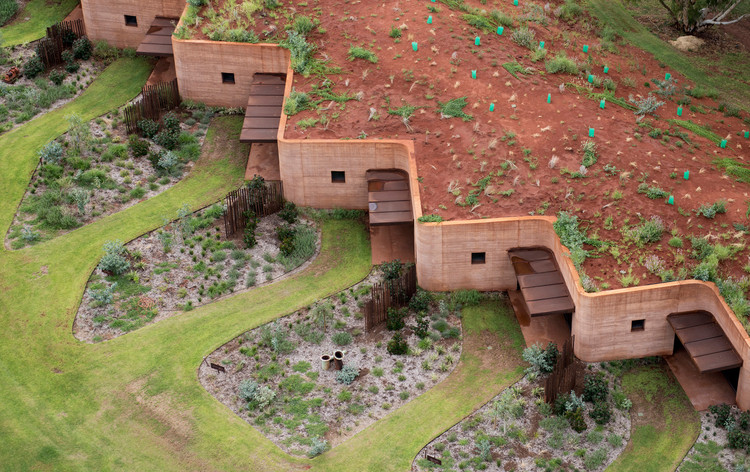 Rammed earth mainly, with some Cor-Ten steel and concrete.

The landscape featured in North Western Australia, with its iron ore rich soil, sand dunes and harsh environmental and climatic constraints, served as a great foil for the imagination when developing this project. The remote and isolated location of the site also required a practical solution of sourcing materials locally. The rammed earth wall construction is composed of iron rich, sandy clay that is a dominant feature of the site, and pebbles and gravel were quarried from the nearby river bed and bonded with water from the local bore hole. The concrete slab contains gravel and aggregates from the local river, which lend a reddish color to its polished surface. In this hot and harsh climate using rammed earth made perfect sense, as the clay component of the wall has hygroscopic characteristics, and airflow along the wall draws moisture from it through evaporation. This evaporative cooling reduces the temperature of the wall in the same way sweat cools the body.

The 230-meter long rammed earth wall meanders along the edge of a sand dune, like a natural cut in the topography, reflecting the environment it inhabits. The wall is stepped to organically follow the natural curve of the landscape, while at the same time providing a level of privacy to each of the enclosed twelve residences buried into the sand dune. The use of the rammed earth, as well as the underground nature of the buildings, was chosen to maintain the residences’ cool and constant temperature. Designed according to these thermal mass principles, the accommodations represent a new approach to remote North Western Australia architecture: it moves away from the sun baked, thin corrugated metal shelters, and cools architectural earth formations naturally.

What were the advantages that this material offered in the construction of the project?

With the 450 millimeter thick rammed earth facade, and the sand dune to the rear and forming the roofs, the residences have the best thermal mass available, which makes them naturally cool in the subtropical climate. Rammed earth is a quarried mix of clay, sand, gravel and does not need any processing or energy intensive production like bricks and cement. Since the material was sourced in close proximity to the site, the material has relatively little embodied energy content. The awning roof is a Cor-Ten steel cyclonic shade frame, mirrored by a concrete slab on the ground. The deep awning roof is designed to keep the sun out during the hottest part of the day and invite the inhabitant to go outside and enjoy the cool evening breeze.

The energy efficiency provisions in the current Building Code of Australia are based uniquely on the thermal conductivity of a material. Thermal mass and hygroscopic characteristics are not factored. We had to employ Floyd Energy consultants to use a more sophisticated evaluation and simulation program that confirmed the superiority of a high thermal mass rammed earth construction.

Not really. In this part of the world we needed thermal mass, so any other alternative would be involving either brick or concrete, both of which would have to be imported. In the case of rammed earth, 90% was sourced locally.

We had already worked with rammed earth constructions in Sydney, so the knowledge has been evolved in house for some time with projects like Kirribilli House. Our providers and contractors were sourced locally from WA: the builder was Jaxon Construction, the rammed earth contractor was Murchison Stabilised Earth Pty Ltd, the structural consultant was Pritchard Francis, and the environmental consultant was Floyd Energy. 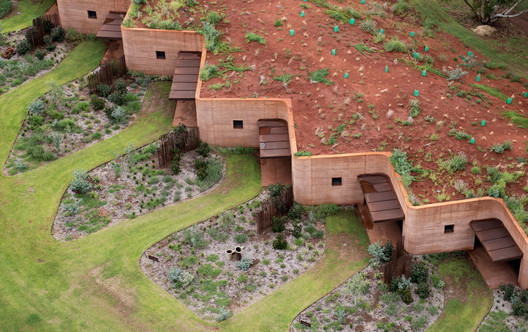