The Lucas Museum has been looking for a home in all the wrong places. Following months of fiery debate over the future of the museum’s proposed lakefront location, George Lucas announced that he is abandoning plans to build the project in Chicago and will instead return to looking for a site in California. This is the second failed location for the museum, after being rejected by San Francisco’s Presidio Trust in early 2014.

The commission for the 300,000 square foot (27870 square meter) museum on 17 acres of Chicago lakefront property was won in July of 2014 by MAD Architects for their white, sculptural “mountain” topped by a “metallic crown,” and was quickly approved by the Chicago City Council, the Plan Commission and the Chicago Park District, the owners of the land. But the proposal went on hold in November of that year, when the group Friends of the Parks filed a federal lawsuit halting construction.

As it stands now, the site in question is occupied by a 1,500-space parking lot just south of Soldier Field that serves as a tailgating area during the Chicago Bears’ 8 annual home games. Proponents of the museum had argued that the project would bring “an iconic architectural structure and additional green space to an otherwise blank, paved, and bleak city landscape” and provide thousands of jobs, without costing taxpayers any money.

But Friends of the Parks feared the implications of placing a private museum on the public lakefront, claiming that the project was in violation of the public trust doctrine, which states that governments must protect certain natural resources for public use. They had hoped instead to preserve the land to someday become a vast park. While the group had hinted at comprise in recent discussions, the lawsuit was never withdrawn, prompting Lucas to take action.

"No one benefits from continuing their seemingly unending litigation to protect a parking lot," said Lucas. "The actions initiated by Friends of Parks and their recent attempts to extract concessions from the city have effectively overridden approvals received from numerous democratically elected bodies of government."

The museum will now return to pursuing a location in California, Lucas’ birthplace and home to many of the filming locations for Star Wars, the famous movie franchise created by Lucas. Potential sites include an island in the middle of San Francisco Bay and the city of Los Angeles, which has publicly expressed interest in the project.

News via the Chicago Tribune. 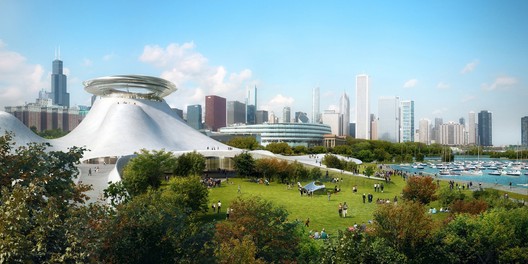