Dutch firm LEVS Architecten won an international competition to design a new residential zone near the Russian city of Kazan. The winning design encompasses the 180-hectare masterplan for the area as well as its architectural content. Along with VLUGP landscape, LEVS used a "Dutch Approach," embracing pedestrian networks, green space and "spirited architecture." The extent of the project will form its own neighborhood, titled "Machaon Valley," and is intended to be fully realized by 2025. 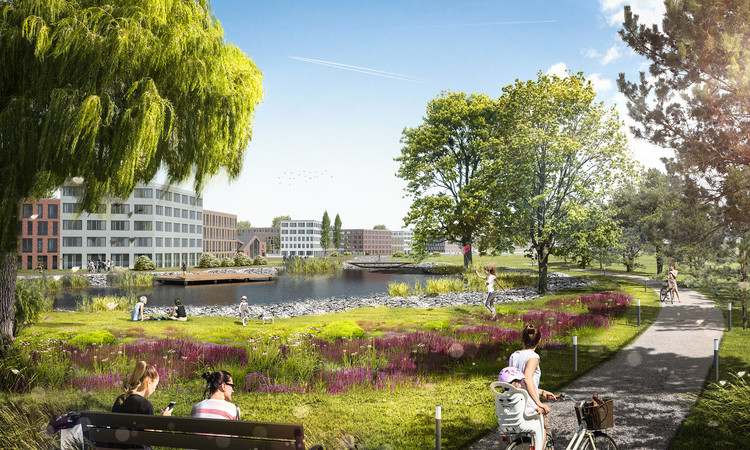 The project is sited upon a largely untouched landscape bordering the town of Malye Kabany, 20 kilometers south of Kazan. Over the next 20 years, the area will undergo rapid urbanization, with the implementation of several new neighborhoods and the necessary infrastructure to link the area to other cities and the nearby airport. The masterplan for Machaon Valley was designed with these connections in mind, while also orienting itself to the natural landscape.

LEVS and VLUGP have used their shared approach to landscape design to thoughtfully negotiate the disjunct between this historic natural setting and the proposed development. Their design takes its cues from existing geographic features such as the rolling terrain and dry riverbeds to echo the natural topography. Where the development meets the natural landscape, the periphery is softened by an extended parkland, which will eventually create a green link to future north-eastern developments.

The new neighbourhood is divided by a second, urban parkland that connects the new area to the old town. Distributed across the site are new apartments in a series of closed or half-open blocks, each encircling its own green courtyard. The residential density is punctuated with public program, including a community center and library, a theatre, retail, schools and daycare centers. Along with planned communal zones, the intimate dimensions and informal walkways encourage additional, unplanned social interaction.

Run by Kazan-based developers Unistroy, the competition sought to break from the "typical monotonous and isolated Russian neighborhoods of repetitive housing." After 11 practices were engaged for the first stage, LEVS and two other firms were asked to present their conceptual masterplans earlier this year. LEVS' win makes this their second active residential project in Russia, alongside a new neighborhood currently under construction in Yekaterinburg.