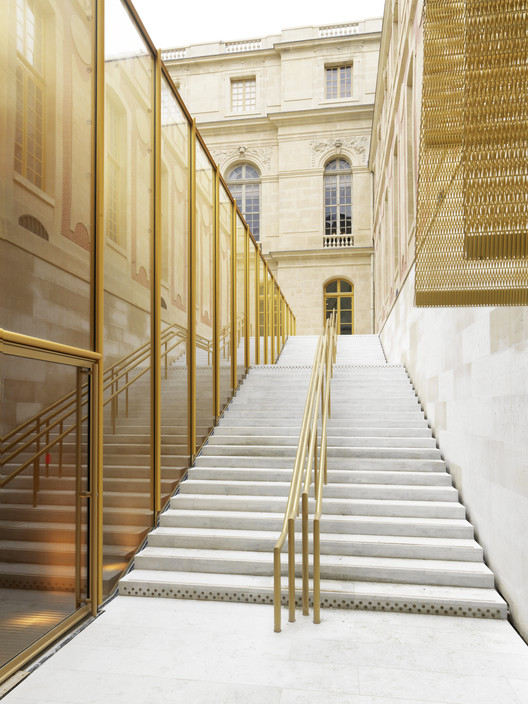 Text description provided by the architects. The re-development of the pavilion dufour and the old Wing creates two new public spaces in the château de versailles. the old administrative offices have now made way for a new reception area between the cour royale (royal courtyard) and the cour des princes (princes’ courtyard), as well as a large staircase leading to the gardens. visitors to the palace are invited to follow a loop, just like in most of the world’s greatest museums.

The feeling of “narrowness” has now disappeared: by digging a trench under the buildings and the cour des princes, the redevelopment opens up new spaces on the ground level and creates larger volumes on the garden level.

The new reception area, entirely dedicated to enhancing visitor experience, starts in the Galerie des lustres (chandeliers Gallery) on the ground floor of the old Wing. this high-ceilinged space, which opens on to the cour royale and the cour des princes, is the first room visitors see as they make their way into the palace. the versailles they discover – draped in metal, elegant and modern – echoes the stone and woodwork of the historic buildings.

The gallery allows immediate access to the cour royale, where the visit begins. before they exit, visitors follow a lower path on the garden level, underneath the cour des princes, which takes them to a string of new rooms including a bookstore in refurbished tanks, restrooms, a checkroom and a cloakroom.

The main attraction on this level is the natural light brought into the new space by a gold-colored glass corridor. acting like a large prism, the glass panels reveal the facades of the old Wing and the wide marble staircase which connects the inside to the outside, and the château to its gardens.

The loop begins and ends with the reception area and the marble staircase alongside its golden prism: The two new spaces are thus connected like the clasp on a necklace.

the pavilion dufour and the old Wing are revived on their upper levels as well as their foundations. on the se- cond floor, a new restaurant and adjoining tea rooms in gold and listed wood paneling, now welcome visitors. finally, the third floor now hosts a new auditorium, covered in wood sheathing like an upside-down boat hull and surrounded with period rooms on either side.

This redevelopment evidences the intrinsic qualities of classical architecture: under the guise of stillness and sym- metry, everything remains the same and yet everything changes. historical heritage is entirely preserved, while allowing for new contemporary usages that remain to be invented. the pavilion dufour and the old Wing of the palace are part of a whole, and yet they also exist as an independent area, separate from the rest of the château. by working “under the skin” of the buildings, the redevelopment offers a functional, sustainable and efficient solution while preserving the larger layout of the palace and the outline of its wings.

Throughout each era in its long history, the château de versailles has acted as a showcase for modern talents. With the pavilion dufour, the old Wing and the perrault staircase, the château remains faithful to its heritage. 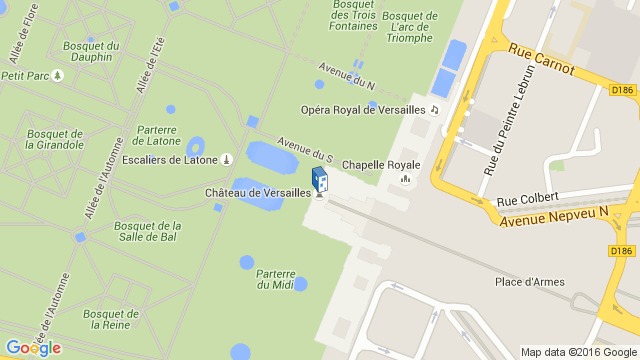