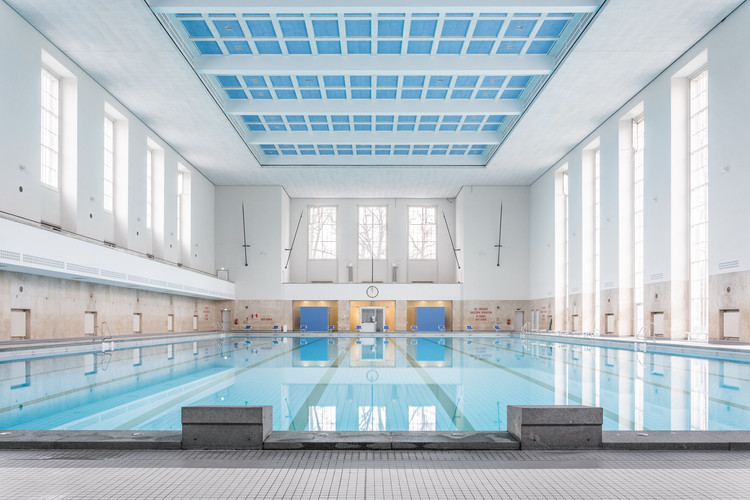 Text description provided by the architects. B43 Indoor Swimming Pool, Finckensteinallee, Berlin-Lichterfelde
The restoration of this extensive South-Berlin pool prioritized the intelligent integration of technical and restoration questions, while placing particular emphasis on the sensitive handling of the historic substance from the design point of view.
The baths, designed by Karl Reichle and Karl Badberger and opened in 1938, were built on the site of a former cadet school and were originally used as a physical training facility for the SS Leibstandarte. At the time of its original completion the competition-standard complex with its 25 x 50 meter pool was the largest and most modern pool in Europe. In the post-war decades the swimming pool was used by US allies stationed in Berlin, subsequently becoming part of the Berlin Pools Association in 1994. In 2006 the hall was closed due to both wear-and-tear and construction defects.

The restoration was carried out according to an architectural concept that differentiated specifically between conservation, re-use, and the further development of structural components and spatial groupings. The conservation work involved carefully optimising the external shell of the building, while in the pool hall itself the creation of a new roof enabled the architects to recreate the sense of space had been found here up to the 1970s. The showers and changing rooms were prime candidates for further development, as is reflected in the new colour scheme for these zones.

Alongside the careful renovation of the building envelope, the renovation and modernization of this building with its monumental brick façade also encompassed the thorough renewal of all technical and functional elements while ensuring the entire system conforms with contemporary energy standards. Moreover, surviving historic details such as reliefs and natural stone or marble surfaces were authentically restored.
The swimming pool complex, restored to the expression of its original character, was reopened as a public sports pool in September 2014. 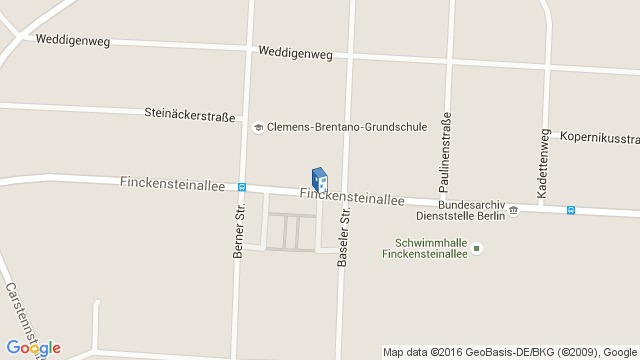 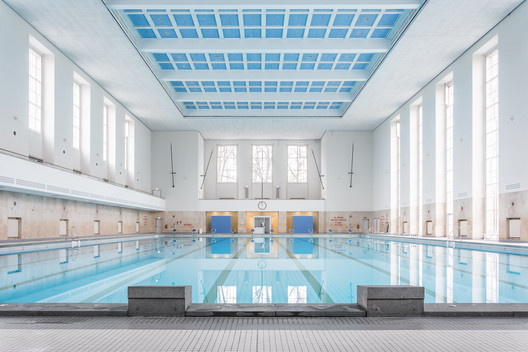