OMA’s long-awaited conversion of the 16th century Fondaco dei Tedeschi as a department store is finally complete in Venice. The project was commissioned by Edizione S.r.l., the Benetton family's holding company, in 2009, and will bring comprehensive changes to one of the city’s largest and most recognizable buildings. The Fondaco was first begun in 1228 and is located at the foot of the Rialto Bridge, across from the fish market. With many past lives, it was first used as a trading post for German merchants, later as a customs house under Napoleon, and in the twentieth century, as a post office under Mussolini. Despite numerous and radical structural changes, the building was listed as a 'Monument' in 1987, restricting further alterations. 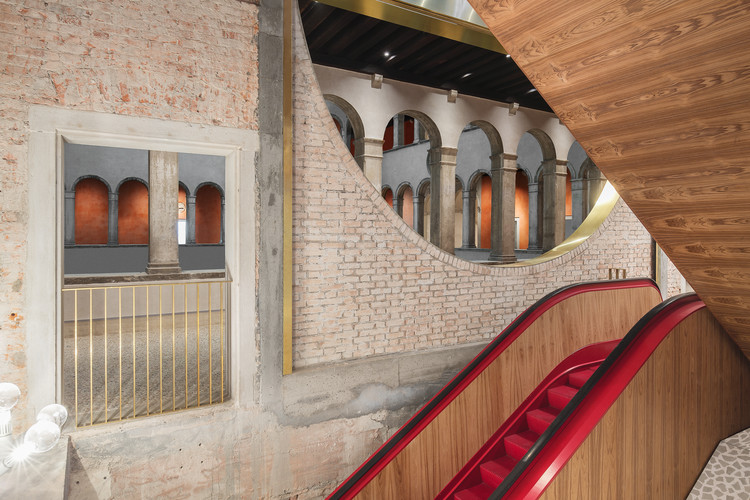 The project’s renovation scheme, lead by Rem Koolhaas, Ippolito Pestellini Laparelli, and Silvia Sandor, is comprised of a finite number of interventions and vertical distribution devices. The augmentations including a new steel and glass floor over the building’s central pavilion, new entrances, and a wooden terrace on the building’s roof, among other smaller changes. According to the architects, “both subtle and ambitious, [the design] continues the Fondaco’s tradition of vitality and adaptation, its preservation [being] yet another chapter of the building’s illustrious and multi-layered history. It avoids nostalgic reconstructions of the past and it demystifies the ‘sacred’ image of a historical building.”

OMA has been on a streak of widely praised preservation projects and interventions, including the Fondazione Prada in Milan, the Garage Center for Contemporary Art in Moscow, or the old Commonwealth Institute being at the center of Holland Green, and the new home of London’s Design Museum. To further discuss preservation tactics and how they specifically applied at the Fondaco dei Tedeschi, what follows is a brief interview with Ippolito Pestellini Laparelli.

Vladimir Gintoff (VG): For a building that was supposedly barred from changes after 1987, and with the photographs showing what appear to be some major interior renovations, I'm wondering if you could explain the procedure to implement the alterations? Are all of OMA's interventions things that can be removed and undone?

Ippolito Pestellini Laparelli (IPL): Any preservation project implies long negotiations with local authorities and the accumulation of extensive knowledge about the architecture artifact. It is inevitably the outcome of a complex process of dialogue and compromise, that unfolds on the slippery territory of interpretation of preservation norms.

In Venice we faced the challenge of transforming a former 16th century German trading warehouse (which became an 18th century customs office, then a 1930s post office) into a contemporary department store. Almost entirely reconstructed with modern concrete technology during the fascist regime, il Fondaco dei Tedeschi is in fact a historical palimpsest of modern substance, its preservation spanning five centuries of construction techniques.

Regardless of the history of its adaptations and the objective lack of authenticity of its structure, its legal status of “monument” placed it under a severe regime of preservation, forbidding almost any change. Dealing with it meant facing this paradox. Dealing with this paradox meant engaging in an intense dialogue with the city, proving at every stage the actual modernity of the building and the coherence of our intervention.

After years of creative negotiation with local authorities, national heritage institutions and local citizens, the project has now materialized. It is based on a finite number of permanent interventions and vertical distribution devices culminating in a new roof terrace. Each intervention is conceived as a brutal excavation through the existing mass, liberating new perspectives and unveiling the real substance of the building to its visitors. With an almost forensic attitude, each new component serves as a way to show the stratification of materials and construction techniques. The preservation of the Fondaco dei Tedeschi is the history of its change.

VG: Quoting from Svetlana Boym in the press materials – “nostalgia is a rebellion against the modern idea of time, the time of history and progress” – does OMA see this project as being nostalgic? Personally it seems the opposite, both in the material choices and the idea of continuing to intervene on a historic building, it appears intent on future perspectives as an antithesis to stagnation.

IPL: The project is the opposite of nostalgic. It actually resists the idea of nostalgia as described by Svetlana Boym in two complementary ways: by introducing clear modern inserts through the building and by using the same inserts to unveil the history of brutal transformations of the Fondaco – an accumulation of construction techniques from different épochs, typical of many historical buildings in Venice, proving that our fascination with the past is a relatively recent cultural deviation.

Our intervention in Venice relates to the architecture tradition of a dynamic relationship with history, that in Italy had its peaks of expression in the ‘70s with the works of Ignazio Gardella, Franco Albini, Carlo Scarpa and others.

VG: In projects like the Fondaco dei Tedesch and others that preserve existing structures, could you explain how OMA's views on preservation have been shaped? When elements of past functions coexist with present programmatic mandates, are users expected to consider these heterogenous narratives in their engagement with the space, or are historic facets preserved out of necessity and convenience?

IPL: At the Venice Architectural Biennale of 2010, our office presented a body of work focused on our persistent preoccupation with preservation and with the past. The exhibition was symbolically named Cronocaos and in general it showed the implications in the current cultural moment of a nostalgic surrender to the past as opposed to a proactive relationship to history. For our practice such implications are potentially devastating: a growing resistance in accepting change and modernization as an inevitable evolution; philological restorations focused on a literal reconstruction of the past; preemptive norms forcing new projects to look like old ones, generating an undefined soup of past and present “authenticities.”

In different ways and in different contexts our recent projects are a response to this tendency: in each the presence of the past is part of a larger spatial and historical narrative, while maintaining a functional role. At the Garage Center for Contemporary Art in Moscow, for the transformation of a modern generic building, we adopted a process more similar to the preservation of decay than actual restoration, by encapsulating a modern concrete ruin – intentionally left bruised and exposed - within a new technical façade; in Milan the curatorial needs of contemporary art foundation were the reason for the addition of 3 new architectures to the already rich repertoire of existing spaces; together old and new work as a continuous sequence of indoor/outdoor spaces, where old and new meet dynamically, hanging in balance but never really colliding; in Venice the entire building works as device to read through the history of transformations of the building - and more in general of the entire city - demystifying the sacrality of the historical monument.

VG: In what one might call an architectural addendum, do you see materials as playing the key roles in the aforementioned projects as well as Fondaco, and if so, how were the materials chosen?

IPL: Materials always play a crucial role. The combination of new, old or restored surfaces generates different associations and meanings, contributing in different ways to the main ideas of each project and more in general to the notion of “historical layering." In Moscow the new façade – a translucent layer of polycarbonate panels containing new technical arteries – acts as a veil around the concrete ruin; in Milan where old and new meet dynamically in a continuous sequence, identities of spaces and interventions are clearly defined by the contrast of materials, a collage of preservation techniques and forms of expression, ranging from generic grey plaster, to experimental aluminum foam, from a thin layer of gold coating to white concrete; in Venice the array of tectonic conditions and materials – scraped walls, diverse degrees of oxidized brass, restored ancient stones, exposed concrete, old/new marble patterns, new steel construction etc.. – serve as forensic evidences of the complex history of transformations of the building, from the XVI to its latest evolution.

VG: Calling these preservation projects “a radical shift from the egocentric and iconic to the invisible and contextual” does OMA believe that cities that have long-established identities should only have interventions of subtlety, or is this just another phase in the office's development that could shift based on outside factors, economic, social, etc.?

IPL: Differently to new construction, preservation implies another mind-frame: one probably less concerned with form and design but more with history, program, systems, materials, technology, etc. There is no dogmatic answer to this question though. Preservation is one of the many domains to operate as an architect, and cities – both historical or more contemporary – need different degrees and types of interventions to generate rich and complex urban environments.

OMA’s interest in preservation is in any case not recent. Cronocaos at the Venice Biennale of 2010 featured 27 OMA projects never “presented before as a body of work concerned with time and history.” Spanning across more than 30 years of practice, they showed OMA’s latent yet undeclared interest in preservation, highlighting 27 architectural concepts of how OMA dealt with the existing, in different historical, cultural and environmental contexts around the world.

Preservation has been an intrinsic part of our office since the beginning of its history: from the 1979 project for the Dutch Parliament Extension, to the most recent completions.