Read more
Save
Home Economics: Inside the British Pavilion at the 2016 Venice Biennale
Presented by: 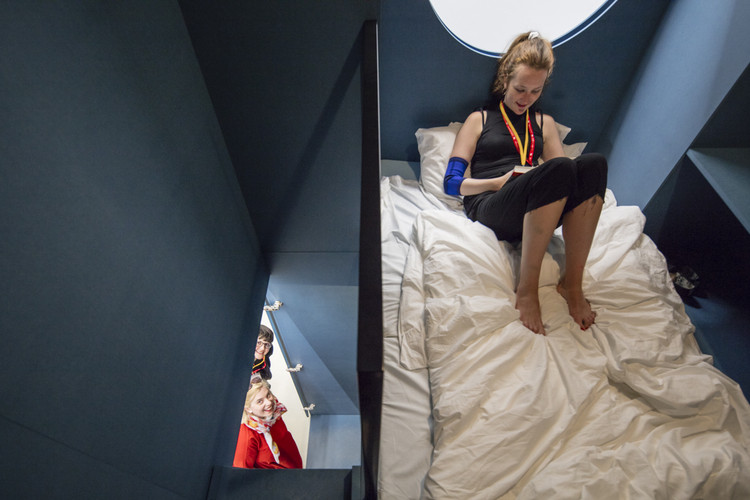 While this has been rightly lauded as appropriate for the Chilean context, the UK tried something similar forty years ago and it has ended terribly. Under Margaret Thatcher, vast amounts of social housing was sold to residents at a reduced price. A whole generation became home-owners. Sadly, Thatcher made it illegal for money from the sale of state housing to be used to build more housing, in effect engineering a massive shortage. When this generation came to sell their homes they did so at the market value, pocketing huge profits. Because there are so few homes their value has skyrocketed, preventing younger people from ever owning, and becoming the so-called “generation rent.”

Aravena is also the curator of this year’s Venice Architecture Biennale, and he has challenged the world of architecture to “report from the front” – calling on each country to define its own “frontline of architecture.” By doing this, Aravena has tried to change the entire definition of architecture. In his curatorial statement, he focused on the global forces promoting individual gain over collective prosperity, and lay down a challenge for architects to “look at reality” and to “imagine different and alternative solutions.”

Aravena has therefore asked the national curators to look at the biggest challenges facing their countries, and then to form a plan for how they might be able to help. The nature of these issues could potentially vary enormously, from food security to mass migration, or from illiteracy to social wealth polarisation. What makes this unlike previous approaches is that these are not intrinsically architectural subjects. In fact, architects really struggle to address these types of conditions with anything near the scale required. Rather, Aravena is subtly pivoting the entire subject of the biennale from a study of architecture in society to the humanitarian role of the architect as a social figure. At the same time, he is dissolving the ideal of a universal condition for architecture and arguing that an accurate worldview assessment can only stem from precise regionalism. The militant and activist overtones of the brief recall the old protest slogan “think global, act local.”

As curators of the British Pavilion, this dramatic – neigh, paradigmatic – shift in approach presented a real mixed basket of potentially contradictory conditions. Where and what is the “frontline” in Britain today? What is its relationship to architecture? More precisely, what agency does architecture have in this theatre? The term “frontline” is highly emotive, one that eschews “problems” and “questions” in favour of “enemies.” As a metaphor, it begins to get tricky when we follow the military logic to its extreme conclusion: problems have solutions, and questions have responses, but enemies simply have to be defeated. At the same time, an insistence on “reportage” (and not rampage) directs us away from battle and towards a kind of show and tell, or perhaps a precise survey of the lay of the land. This passive territorial exploration sits somewhat at odds with the simultaneous command to “enter the fray.” All this begs the question: what is architecture actually good for?

Undoubtedly, the frontline in Britain today is our societal failure to provide sufficient housing. This is primarily a product of sweeping reforms in the early 1980s by precisely those forces Aravena says he resists: the promotion of private gain over common prosperity (Thatcher’s Right to Buy programme in particular). However, from an architectural perspective it is not enough to simply define the British “frontline” as an economic problem of supply shortfall. This dearth has been caused by a confluence of toxic ideology mixed with regulatory and financial oversight. But without understanding how the politics of the family home has shaped this condition we only have half the picture. After all, inasmuch as Thatcher met the nation’s demand for home ownership, she was also instrumental in creating that demand in the first place.

The frontline of architecture in Britain today is not just a housing crisis; it is a crisis of the home. Over the last two decades our patterns of life have changed so profoundly that architecture has struggled to keep apace. Gender roles in society and power roles in the family have changed – affecting the size and formation of our households. Cheap international travel and the European Union have made short and medium-term relocation accessible, and most of us will live in at least two cities besides our birthplace before we are 25 (whether as a student for a few years, or on a business contract for a few months). Perhaps more importantly than budget airlines, the rise in ubiquitous mobile telephony has facilitated and accelerated this mass migration and movement. Twenty years ago the World Wide Web was a renegade place dominated by Napster, chat rooms and low-res gifs. Today it is controlled by a few colossal walled gardens (Google, Apple, Facebook), whose silos nonetheless permit remote work and connectivity on a historically unprecedented scale (even while their constant alerts compel you to never unplug).

In economic terms, the return on investment has consistently outpaced wage growth, producing a less equal and more polarised society. This means greater wealth disparity between classes (the 99% vs. 1%) as well as greater inequality between generations. Our parents’ homes have gone up quite a lot in value since the 1970s. But their children’s wages haven’t increased in relative terms at all; after adjusting for inflation, buying a home is considerably more expensive today. Who is going to cover this gap? Why, the money to do that will most likely come from the bank of mum and dad. For those who do not have access to intergenerational wealth, there is no prospect for improving their situation. We can continue to struggle, and believe that hard work will one day pay off, but that is not going to happen. Since Aravena asked us to “face reality” I will say this: the way you’re living now, which is most probably in cramped, overpriced and over-occupied urban housing, that is the way you will live until your early forties. We must seriously explore alternatives to the traditional mortgage and the British Dream of home ownership.

As a subject, home economics is the science of the household. It is an especially British one in many ways, and for decades it was a core course in high schools. Home economics concerns how to boil an egg as much as how to apply for a mortgage, decorate a living room, mend a shirt or balance a shopping budget. It is the study of ergonomics, economics and econometrics in the domestic realm. For this reason, we felt this subject was an appropriate framework for understanding the crisis of contemporary living.

Home Economics as an exhibition proposes five new models for domestic life, curated through time of domestic occupancy. Through five distinct periods (hours, days, months, years and decades) it argues that by designing first with time (as opposed to space) we can overturn the functionalist perspective in western architecture and reinstate a rationalist understanding of dwelling. As far as we are aware, it is also the first exhibition on architecture to be curated through time in the home. Each of these five models addresses a different facet of our “frontline” crisis of living, from how to prevent speculation and exploitation in real estate markets to how sharing can be a form of luxury and not a compromise. Each model has been developed in an intensely pragmatic and totalising way, by harnessing the expertise of diverse advisors and collaborators ranging from developers and financial institutions to engineers, architects, artists, fashion designers, photographers and filmmakers. Not only has Home Economics produced a wealth of research, artistic and cultural output, some of its collaborations may result in new kinds of built work. This focus on reality, and dedication to sincerely improving the lot for the British, is extremely important if we are to seriously address how we might live in the future.

Jack Self is an architect and writer. He curated the British Pavilion with Finn Williams and Shumi Bose. Home Economics was commissioned by the British Council.