✕
Save
At Kunstmuseum Basel, iart Creates a Frieze with a Technological Twist
Share
Or
Copy

Though it was once an essential element of all classical structures, the frieze has largely been left behind by architects looking for contemporary façade systems. But at the recently-opened addition to the Kunstmuseum Basel, designed by Swiss architects Christ & Gantenbein in collaboration with design group iart, the frieze returns with an eye-catching, technological twist, as hidden pixels within the facade light up to display moving images and text to those below. 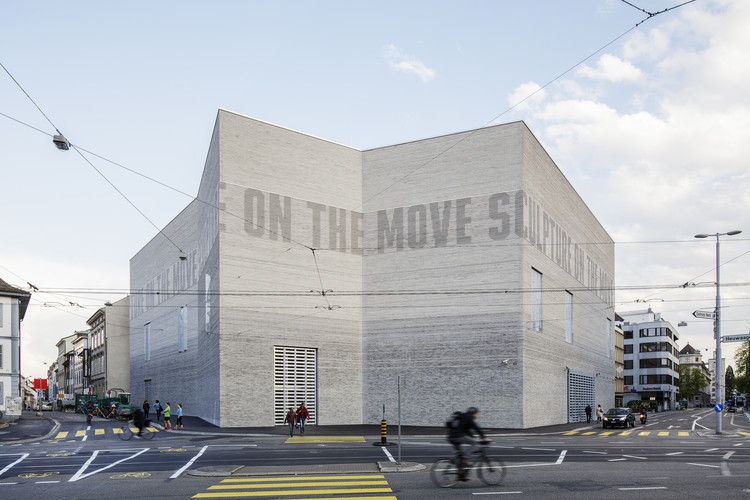 The new frieze is surprising in that it is constructed of the same material as the rest of the museum’s façade, 8-centimeter-tall gray bricks that the designers say “exude the timeless and archaic air of an ancient ruin.” But in the frieze, a custom-developed concave groove has been cut from the bottom of each brick. When daylight passes over the frieze, it casts a shadow into the grooves, making them appear darker than the surrounding façade.

LEDs are then mounted into the flat profile of each of these grooves. When turned on, the light reflects off of the brick’s concave underside and is reflected out toward the street, matching the brick’s appearance to the rest of the façade. This allows the lights to act as pixels in the horizontal band which wraps around the building. The lights can be turned on and off to create different patterns or to display text.

As daylight fades, the system works the opposite way: text and patterns are displayed by illuminating the pixels and leaving the surrounding pixels dark. The outside of the building contains light sensors to regulate the LED strength necessary to create the smooth transition between the frieze and the surrounding façade.

As exhibitions and programs within the museum rotate, the frieze can be programmed to display different messages and images. The frieze was utilized to advertise the addition’s first exhibition, “Sculpture on the Move,” and will surely serve as a landmark in the city for many exhibitions to come.

See the project in full here.