Crossrail Limited has released new renderings of stations set to open on the Elizabeth Line in London. Notable features of the new stations include step-free access from train to street, and seamless integration into the existing Transport for London (TfL) network. Seating, signage and full-height platform screen doors emulate precedents within the system to promote ease and familiarity. The designs strive for simplicity and clarity with reduced visual clutter and clear sight lines along platforms. Additionally, there will be permanent artworks installed and fully-integrated in many of the central London stations. The stations depicted – Paddington, architect Weston Williamson, Bond Street, architect John McAslan + Partners, Tottenham Court Road, architect Hawkins\Brown, Farringdon, architect Aedas, Liverpool Street, architect Wilkinson Eyre, Whitechapel, architect BDP, and Woolwich, architect Weston Williamson – are scheduled to begin service in December of 2018. 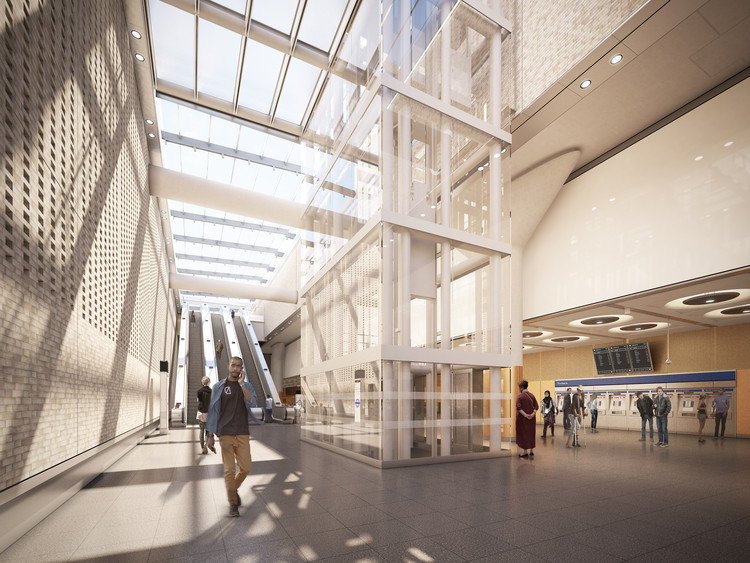 According to Julian Robinson, Head of Architecture at Crossrail Limited, “The Crossrail project has worked with world-leading architects and designers to deliver a new railway that draws upon the fantastic transport architectural heritage of London and London Underground with each station reflecting the distinct character of the surrounding area and presenting a common line identity.” Cited examples of this symbiosis include the Elizabeth Line’s station at Paddington echoing the design and legacy of Brunel’s existing terminus building, and the inspiration for Farringdon coming from the architecture of the Barbican and historic local trade work by blacksmiths and goldsmiths.

Designing the stations, public spaces, and over-site developments in tandem has allowed for a coherent strategy, which would not be possible if the approach were more piecemeal. When complete, Crossrail will have 40 terminals from Reading and Heathrow in the west to Shenfield and Abbey Wood in the east. The images are also on view alongside architectural components designed for the stations at new exhibition, Platform for Design, at the Royal Institute of British Architects (RIBA).