In terms of memorialization, being selected to represent your country as the face of a banknote is one of the highest honors you can achieve. Even if electronic transfer seems to be the way of the future, cash remains the reliable standard for exchange of goods and services, so being pasted to the front of a bill guarantees people will see your face on a near-daily basis, ensuring your legacy carries on.

In some countries, the names of the faces even become slang terms for the bills themselves. While “counting Le Corbusiers” doesn’t quite roll off the tongue, a select few architects have still been lucky enough to have been featured on such banknotes in recent history. Read on to find out who the 15 architects immortalized in currency are and what they’re worth.

An architect that needs no introduction, Le Corbusier was a preeminent pioneer of the Modernist movement. Works in his home country of Switzerland include the Heidi Weber Museum, also known as Centre Le Corbusier. Le Corbusier's portrait is featured on the 10 Swiss Francs banknote, pictured with his distinctive spectacles.

A neoclassical architect prominent in the early 20th century, Tamanian is known for his Armenian Opera Theater and work throughout the capital city of Yerevan. He is featured on the 500 Dram banknote.

Kemaleddin was Turkey’s leading architect in the late Ottoman period, blending traditional Ottoman styles with European sensibility. The reverse side of the current 20-lira banknote depicts Kemaleddin together with one of his major works, Gazi University in Ankara.

A leader of the Art Nouveau movement in the UK, Mackintosh was known for buildings such as the Mackintosh Building at the Glasgow School of Art. He can been seen on the £100 denomination, in circulation since 2009.

The chief architect for the Ottoman Empire under the rule of sultans Suleiman the Magnificent, Selim II, and Murad III in the 16th century, Sinan designed many of Turkey’s notable mosques and baths. Sinan's portrait was depicted on the backside of the Turkish 10,000 lira banknotes from 1982 to 1995.

Wagner was an Austrian Secessionist architect whose important works include the Austrian Postal Savings Bank in Vienna. The 500 Shilling note featuring his likeness was printed from 1986 to 1997.

Seen on the Belgian 2000 Franc note from 1994 to 2001, architect Victor Horta is most famed for his biomorphic details at Hotel Tassel, which he completed in 1894 and is often recognized as the first instance of Art Nouveau in architecture.

Perhaps the most influential Nordic architect, important works by Modernist Alvar Aalto include the Viipuri Library and Säynätsalo Town Hall. His face graced the Finnish 50 mark note from 1986-2002.

Most widely known for the tower that bears his name, Eiffel was an acclaimed architect and engineer, designing many bridges and buildings in the late 1800s and early 1900s. He was featured on the 200 Franc note from 1996 to 2002.

18th Century Baroque architect Neumann was featured on the German 50 mark note from 1991-2002 alongside one of his greatest achievements, the impressively lavish Würzburg Residence.

Arguably the greatest of all the Baroque artists, Bernini’s sculptures and buildings can still be seen today throughout Italy, notably in his colonnade design for St. Peter’s Square. Bernini adorned the 50,000 lira note from 1985–2002.

Rival to Bernini, Borromini designed some of Rome’s most dramatic churches, San Carlo alle Quattro Fontane and Sant'Ivo alla Sapienza. He was featured on the Swiss 100 franc note from 1976–2000, though not without some controversy, as his hometown of Ticino, while now Swiss territory, was considered part of Italy during Borromini’s lifetime.

From 1992 to 2007 Secessionist architect Plečnik’s portrait could be seen on the 500 tolar note, recognizing his contributions to the architecture of Ljubljana, including the iconic Triple Bridge.

One of the most acclaimed English architects in history, Wren is remembered most fondly for his design of St. Paul’s Cathedral in London. Wren could be seen on the 50 pound note from 1981 to 1996.

Though he is obviously more fondly remembered as a founding father of the United States of America, Thomas Jefferson was also a noted architect, employing neo-palladian ideals in designing the campus of the University of Virginia and in his homestead, Monticello. Jefferson can be found today on the front of the rarely-used 2 dollar bill. 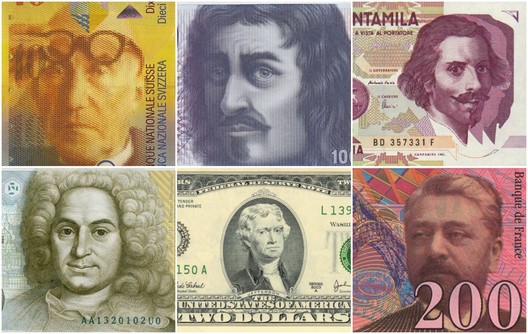