In the Catalan countryside, on the outskirts of the small town of Alforja, sits an incongruous sight: among the scattered stone masia houses is a structure of steel and glass, a resolutely rectilinear box among the traditional housing forms. But once inside the OE House, designed by Fake Industries Architectural Agonism and Aixopluc, one realizes that the building is not so different to its neighbors after all: on the upper floor, the roof incorporates a system of ceramic vaults taken almost directly from traditional vernacular design. This feature then combines with plywood and OSB to create a truly eclectic material pallette. We spoke with the design's architects, David Tapias of Aixopluc and Cristina Goberna and Urtzi Grau of Fake Industries Architectural Agonism, to find out what lay behind these unusual material choices.

As the OEs initial demand was to build two houses—one for summer, one for winter—one on top of the other, it was clear from the start that we would need a totally different material scope in both environments. In the summer house we used really cheap materials, such as OSB and polycarbonate, so we could save money for the winter abodes, where catalan ceramic vaults and okume plywood boards define the intimacy necessary for the colder season. However, the main material for the summer house is air current. For the winter floor, it was the heat of the sun.

For this particular project the influences were both totally off site—the weight and roughness of the Maison Jaoul and the lightness and openess of the first Case Study Houses—and totally on site—the surroundings and masias, ceramic bricks made by hand in a nearby furnace, and upcycling soil from the excavation for the green roof—at the same time.

The big economic crisis in Spain was paradoxically an opportunity to expand material options, as you must always have at least two "A plans" for each construction solution, in order to accept accidents and unforeseen events. If material A1 is not available, we use material A2. If the company that was going to build system A3 has shut down, we will use system A4. This has allowed the house not only to survive the slow and sometimes hard construction process, but actually to improve during these uncertain times. 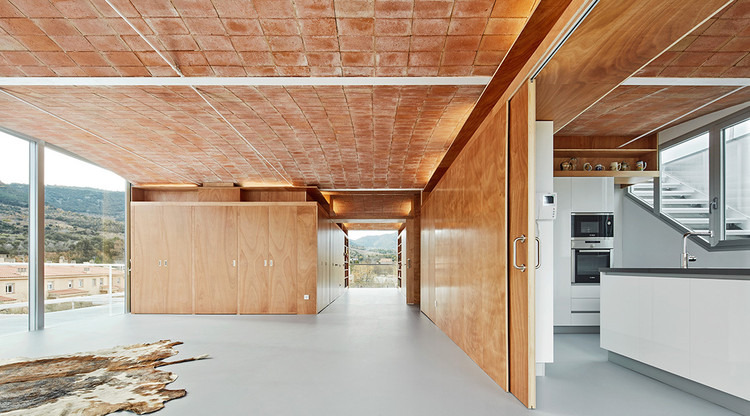 First of all, again, availability. Using standard materials has been key during the economic crisis when stock shortage is an issue. Second, proximity. We chose nearby non-standard or handmade materials sources, so we could be part of the production process.

At the early stages, each concept has an associated material system. At some point we were thinking about building the winter and summer houses with two independent structure systems, exploring an impossible continuity between them. As the project moved on, some of them were discarded, and we developed thin steel frames that contained both opposing environments.

Our materials, providers and contractors search was simultaneous. We started from the local ones, and if they were not available, we moved further until we found the right one.

See the project in full on ArchDaily.