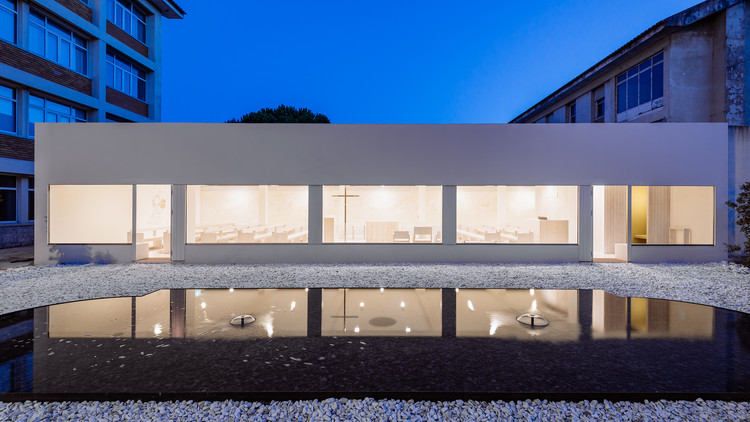 Text description provided by the architects. This is a chapel, or a small church, built in a particular house for particular people – the brotherhood of Instituto Missionário Pio Sociedade de São Paulo. The project brief is based on principles that don’t necessarily concur: it should be the central area for a house of many homes; a space for prayer and for communication; a place of intimacy as well as assembly.

The chapel, consecrated to Jesus Master, sits within Quinta Rainha dos Apóstolos, in Apelação, on the outskirts of Lisbon. This is a rural plot, overlooking a broad valley open to the river Tagus, where the Institute has been located since the 1970s. The existing complex includes a pair of long 4-storey blocks sitting on a ground-floor podium, originally used as a warehouse. This was the area chosen to locate the chapel, taking advantage of its central position in relation to the spaces where to live, to work, to welcome and to pray. The chapel therefore operates as the heart of the Institute, both physically and symbolically; it provides the link between members of the brotherhood and reaches the wider lay community through their publishing/ missionary activities.

The project reuses the existing building and aims to provide it with a new meaning; this is done through a process of austere and rigorous designing, which relies on the simplicity of volumes, natural lighting and inherent qualities of proposed materials. The concrete structure is retained, bare and imperfect but suitable nevertheless, and somehow up-lifted by the new context. The room is revealed as a whole and wide space, without artifice or excess: a backdrop for the liturgical fittings to enhance and impart with a sacred and theological sense.

Among those, the central altar stands out. This is built in solid timber, with no delineation of presbytery - a place for all, without hierarchies. In conjunction with the pulpit, this allows a wide range of layouts and different degrees of intimacy for liturgical celebrations: private celebrations with community brothers gathered around the altar with the garden behind (orientation north / south); regular celebrations with lay assembly (placed along the longitudinal axis with the celebrant facing west); and festive celebrations that fill the chapel (orientation north / south).

The Cross is designed as an integral part of the celebrations and the building. It is physically connected to the concrete structure through an interlocking joint, but can be disengaged to be carried in procession, thus marking the beginning and the end of celebrations.

The internal space is strongly marked by two joinery elements, both with clear liturgical function: the sacristy to the west side, which includes the confessional booth open to the garden, and the partition wall to the south side, which frames the depictions of Jesus Way of the Cross. This wall does not enclose the chapel completely: it allows for the room to be perceived as a whole, through glimpses of the corridor behind it providing connection between the existing buildings.

The external space to the north replicates the volume of the chapel. More than a mere garden, this area is designed as an extension to the praying space. Part of the whole through geometry and materiality, it adds water and vegetation to the simplicity of the set. Public access to the chapel is granted from the south, identified by a timber door with an engraved cross and a bell, both designed in line with the general principles of the project.

The brief required depictions of particular devotions of this brotherhood to be included. These were considered from the start as part of the design, instead of later additions. Original art work was executed in situ by Bartolomeu de Gusmão, on walls and joinery surfaces, creating an intense and global relationship between the space and the religious community. Together, the space and the elements that populate the space convey a clear and critical message to its users – reinforcing the sense of belonging and sharing that imbued the original commission. 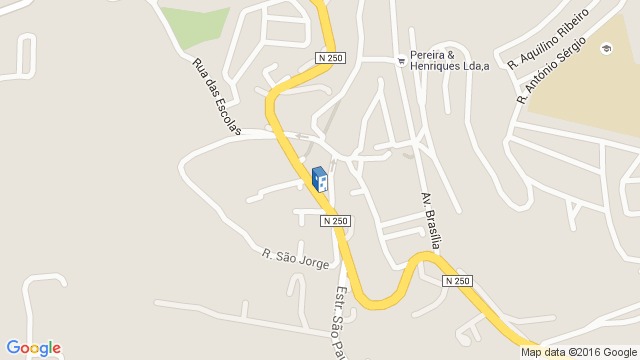