Zaha Hadid Architects (ZHA) has announced a new project in Moscow, winning a competition to design the Sberbank Technopark at the Skolkovo Innovation Centre. This is the firm’s first announcement of new work since the untimely death of Zaha Hadid late last month. As the market leader of the Russian banking and economic circulatory system since 1841, Sberbank’s new 131,000 square meter facility will accommodate 10,000 to 12,000 workers in the sectors of marketing and information technology.

The project developed out of ZHA’s analysis of the working processes and arrangements of Sberbank’s technology and marketing departments. Elaborating on this, Christos Passas, Project Director at Zaha Hadid Architects, said, “The necessity to innovate and collaborate is fundamental to Sberbank’s operations. Our research into interconnected, multi-function environments has driven the Sberbank Technopark design. It responds to the bank’s requirements for enhanced communication, interaction and diversification. The design reconfigures working relationships and adopts a holistic approach to creating an engaging environment that offers a diversified range of facilities both internally and externally.”

The ZHA design beat out competing proposals from SPEECH, Foster + Partners, Eric Owen Moss Architects, and Fuksas. The project is expected to begin construction in approximately 18 months and will take another two years to complete. 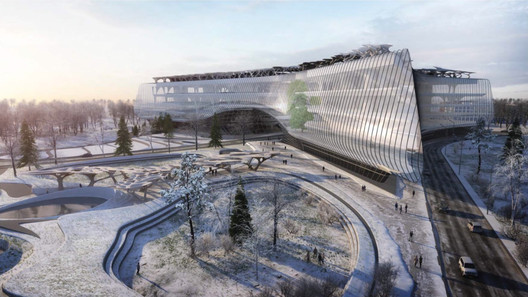