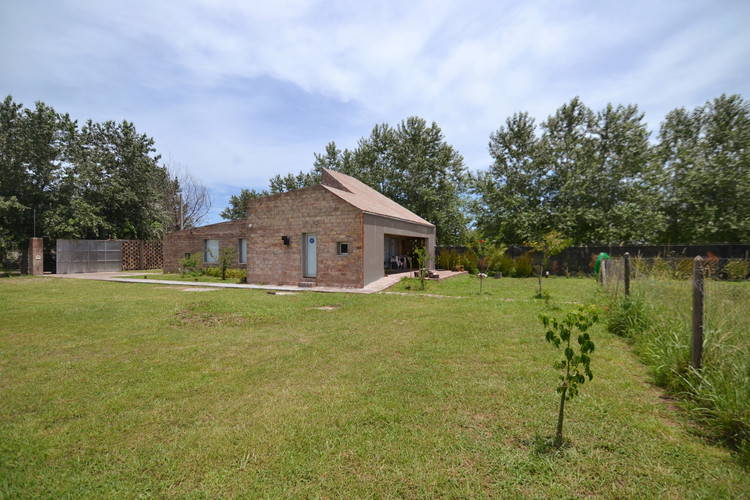 Text description provided by the architects. In a next-to-a-square plot of land: the boundary between is considered as a facade. If we look though it, our plot may be perceived larger than it´s real size.

The house is organized in two blocks: the day area, oriented to the north, with a straight connection to the backyard; and the night area, included on a parallel-to the-square block. A non-solid wall, made with bricks, helps to stop the strong western sun.

The house and its construction where solved with a mortgage credit which was given in quotas. The needs to fulfill the restricted, consecutive stages of this credit and the low budjet, made us organize the building phases with a layers-logic. Each layer responds to a particular phase of the credit, shaping precisely every construction period.

Because of the low budjet, the house was thought as a shell which attempts to cover the largest area as possible, considering but not building inner divisions and extra surfaces. Thereby, the room´s block was conceived as a unique space to be subdivided in the future, in three bedrooms, with furniture walls made with plywood and, in the North’s block, the roof folds generating a high space and suggesting the possibility of a future mezzanine. In this place, a big window allows the incoming of South’s difuse light and, once the mezzanine is built, the opportunity to contemplate the whole adjacent public area´s extension.