Today marks 130 years since the birth of German architect Ludwig Mies van der Rohe. In honor of this tremendously influential figure, we're shining some light into the lesser known facts about Mies' life in order to better understand and contextualize his architecture.

For this, our colleagues at ArchDaily en Español have referred to "Vidas construidas, Biografías de arquitectos" (Constructed Lives, Biographies of Architects), a book by Anatxu Zabalbeascoa and Javier Rodríguez Marcos. This text, released by publisher Gustavo Gili, features the biographies of 20 of the world's most celebrated architects, from the Renaissance to the Modern movement. Each story is a fascinating journey into the lives of each architect, and the details allow us to understand the genesis of many works that are today considered classics.

We've chosen 20 facts that reveal the thoughts, influences and decisions that brought Ludwig Mies van der Rohe's architecture to the forefront of modernism.

1. Defying convention, Ludwig Mies decided at age 30 to keep his mother's (Amalie Rohe) last name, and fuse it with the last name of his father (Michael Mies) with a self-invented "van der" in the middle. This constructed name reminded him of his birthplace in Germany and its neighbor, the Netherlands.

2. He learned about materials from his stonemason father. His senstivity to the beauty of combining different material palettes is best expressed in his masterpiece, The Barcelona Pavilion (1929).

3. He earned his first job in an architecture studio after working out (in one hour!) a drawing of a facade that his boss had been trying to resolve for weeks.

4. His first commission came in 1906 in the form of a project for the Philosopher Alois Riehl in Potsdam. The resulting traditional house carries echoes of 19th century design principles.

5. In 1908 he met Peter Behrens, a master who inspired Mies' passion for the work of Karl Friedrich Schinkel (1781-1841) --Germany's preeminent Neo-Classical architect.

6. In Peter Behren's office he became the colleague of Walter Gropius. Gropius worked on industrial projects while Mies attended to more traditional tasks. During this time they developed a "cordial rivalry."

7. Mies appreciated and was influenced by the work of Dutch architect Hendrik Petrus Berlage, even though Behrens was not as impressed with Berlage's work.

8. The parents of Mies' first wife, Ada Bruhn, were pleased about their daughter's relationship with the architect since they considered his future bright. They were not as pleased, however, with his last name (Mies), which in German means "lousy" or "crummy."

9. The architect's interest in abstraction and rationalism was strengthened by his friendships with artists like Hans Richter, El Lissitzky and Theo van Doesburg.

10. In 1927 Mies was in charge of the urban plan of the Weissenhofsiedlung, an avant-garde showcase of the International Style. He selected, among others, Le Corbusier, Walter Gropius, Peter Behrens, Bruno Taut and Hendrik Petrus Berlage to participate in the project, and he himself designed a three-story apartment building for the estate.

11. In 1930, while the Barcelona Pavilion was taken down from its original location, Mies was named director of the Bauhaus. He was brought in to replace Hannes Meyer, and the students complained as they preferred Meyer's functionalist approach over Mies' aestheticized vision.

12. Many at the Bauhaus were disillusioned when they learned that Mies had been the only one to sign a motion of support for Hitler and National Socialism in 1934.

13. When Mies realized that Hitler's preferred the monumental Neoclassicism of Albert Speer, he decided to leave Germany in 1937.

15. One of the first things Mies did when he arrived in Illinois was meet Frank Lloyd Wright, who received him warmly. (Wright did not extend the same courtesies to Le Corbusier or Walter Gropius, sadly.)

16. During his first years in Chicago he lived in a hotel and claimed to have only three necessities--Martinis, Dunhill cigars and expensive clothes. To that he added three prized possessions--works of art by Max Beckmann, Wassily Kandinsky and Paul Klee.

17. The only commission he received in his first decade outside of Germany came from the University that employed him. He was called on to design the masterplan of the IIT campus, which resulted in the building of a chapel and the famous Crown Hall.

20. Ludwig Mies van der Rohe passed away in 1969, mere weeks after Walter Gropius died. A year before his death, Mies was asked what kind of building he would have liked to build; he answered, "A cathedral." 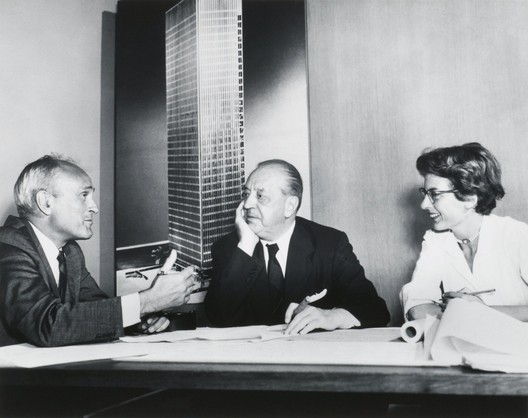